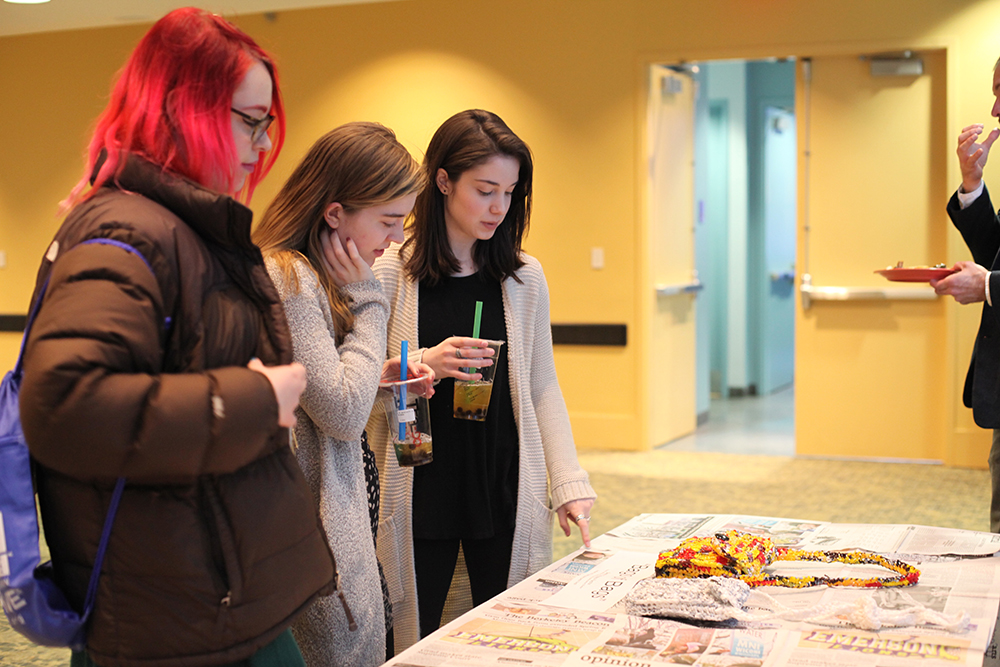 Last winter, Michael Bartz spent 13 hours to fill his entire room—wall-to-wall, floor-to-ceiling—with 1,800 balloons. He confessed he’d only done it because it had been a dream of his.

Yet after the project was over and the balloons were popped, the last thing the visual and media arts major wanted was to waste them all. So he put them on a canvas and turned it into art.

The Up-cycled Art and Fashion Showcase was last Thursday at the Bill Bordy Theater. Bartz, among others, had the chance to display their works, all crafted with recycled waste. This event is part of Emerson College’s RecycleMania, an annual eight-week campaign to raise awareness of recycling and sustainable waste habits.

“[The showcase] poses this really cool challenge to make the coolest thing you can out of things people throw away,” Bartz said.

Tables at the Bill Bordy were covered with past Berkeley Beacon issues, and flowers were kept inside old water bottles. Entries included purses made from supermarket plastic bags; a “living sculpture” created from cardboard boxes, glass bottles, food containers, styrofoam, and seeds and soil from a past project; and even a portrait made from plastic bags, styrofoam, mod podge, and cardboard. The latter, Lady with the Blue Hair, was created by Jaclyn Withers and won third place.

To upcycle something is to reuse what’s otherwise waste and turn it into something of higher value in the end. Everything in the showcase could have been thrown in the trash, but instead was turned into art.

Alexandra Morris, a freshman writing, literature and publishing major, had the idea to put on the showcase.

“The point is to highlight how easy it is to find creative reuses for things,” Morris said, “and to also highlight how wasteful art is. As much as we love it here at an art school... it’s easy to forget that all the elements that go into it creates a lot of waste.”

First place included a prize of $250 and was awarded to Morris and Julia Ercolano, a freshman visual and media arts major. Their piece, Wings de Mothman, created a pair of wings out of discarded cardboard, plastic bags, wood glue, broken paperclips, rubber bands, and a broken backpack.

“We’re really raising awareness for what is recyclable and what can be reused,” Moore said, “As well as trying to minimize trash... and showing students that you can use things that you consider waste for a lot of things.”

Recyclemania began Feb. 6 and will run until April 21. It’s a competition with other schools across the United States and Canada to compare our sustainability habits and see where we stack  up against them. Emerson joins the Massachusetts Institute of Technology, Harvard University, and Boston College among the hundreds of other schools participating.

Currently Emerson College recycles and composts at a rate of 20 percent. That statistic is 10 percent lower than Boston’s rate. Recyclemania also aims to bring us closer to the city average.

Sarah Anderson-Krim, a freshman business and creative enterprises major, fabricated a Sherlock Holmes costume from tossed-away garments like an old blazer, a skirt, and a broken chain. Recycled Sherlock is Anderson-Krim’s way to parallel upcycling with sleuthing out reusable materials for better use.

“I think [the showcase] is a great event for rethinking what we use,” she said, “Because I know when I create fashion pieces, there’s all these extra little bits and bobs left over that I can use in other ways.”

The entries will be on display in the Iwasaki Library in upcoming weeks.

Olivia Martinson is a sophomore writing, literature and publishing major whose earrings, made out of broken jewelry and appliances, won second place.

“It’s important to understand that we create a lot of waste that isn’t necessary,” she said, “But you can take a lot of that unnecessary garbage and repurpose it to make something useful or beautiful. You can do whatever you want with trash.”