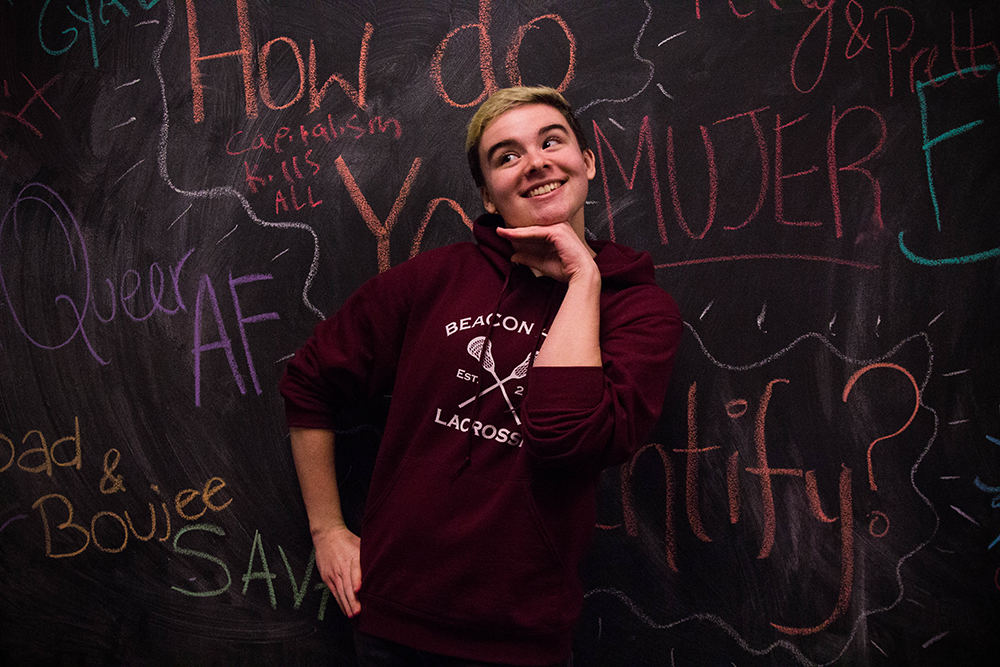 Two members of Emerson’s Alliance for Gays, Lesbians, and Everyone (EAGLE) sit behind a table at the cultural center, scribbling down notes as auditioners recite monologues in front of them. The second annual Queer Monologues production is in two weeks, and EAGLE needs a huge group of passionate writers and dedicated performers to produce an impactful show.

Queer Monologues brings the voices of Emerson’s LGBTQ community into theatrical space. The show features a variety of humorous and dramatic monologues, speeches, and poems.

Queer Monologues first came to life on stage last year with one production date, while this year’s show will have two production dates as EAGLE wanted to give people more opportunities to attend the show. Like last year, writing submissions and performance auditions were open to interested students.

Westley Shearman, a sophomore visual and media arts major and EAGLE’s public relations and marketing representative, will be co-directing this year’s show with Dylan Walton. Shearman is working closely with cast and crew members to mix up the humorous and emotional performance pieces.

Shearman said that there is a certain mindset people have when going into LGBTQ-inspired performances, but the show will deviate from those expectations.

“I think people assume they're going to hear stories that are majorly surrounding white gay cisgender men and stories of super strength in the face ofoppression,” Shearman said. “But ours are much more diverse and much more personal.”

This year’s show retains the format and organization of last year’s, one monologue performed after another, but Shearman said he and the Queer Monologues team are working to highlight the emotional messages muffled last year by having performers enact the pieces they enjoy or relate to.

“We want it to feel a little more personal to the audience and really make sure that the messages and emotions the authors wrote in each piece are really clear,” Shearman said. “We just want to make sure that everyone is kind of really connected emotionally.”

In order to have this emotional connectivity, the directors, stage manager, and book editor met to carefully pick out writing submissions.

Spencer Wright, a freshman visual and media arts major, submitted one of the pieces that will be performed at this year’s show. His piece centered around how young gay men are often overwhelmed and unprepared to deal with coming out.

“You kind of get this vision in your head that’s like ‘When I come out, everyone is going to be so accepting,’” Wright said. “But in reality, a lot of times people are being forced into molds and forced into communities that they don’t necessarily like.”

Wright, an EAGLE member, relays that his participation in the Creating Change LGBTQ Empowerment Conference in Philadelphia inspired him to audition for Queer Monologues. During the conference, Wright heard more about the production from the EAGLE members and excitedly wanted to submit a piece and perform.

Barceló relayed that the show aided their process of coming to terms with being agender and said that it is important to keep putting on LGBTQ based shows.

“In a society where you have a lot of people that don’t even know what agender means—or not understanding what bisexual means—you constantly need to tell people about your experience,” Barceló said. “Queer Monologues is a chance to do that.”

Though some of last year’s pieces will be performed at this year’s show, MacPhail said that the other new pieces and new cast will bring fresh perspectives and a completely different show.

Like Barceló, performing and watching people perform in the first Queer Monologues became an expressive outlet for MacPhail, encouraging him to take to take part again.

“It has a special place in my heart,” MacPhail said. “I haven’t really found similar opportunities to be vulnerable with my queerness.”

The show will be held on the evenings of Feb. 28 and March 1. Shearman said that those interested in gaining insight into the raw experiences of the LGBTQ community should come to watch.