Students take to the Freedom Trail for Survivor Boston 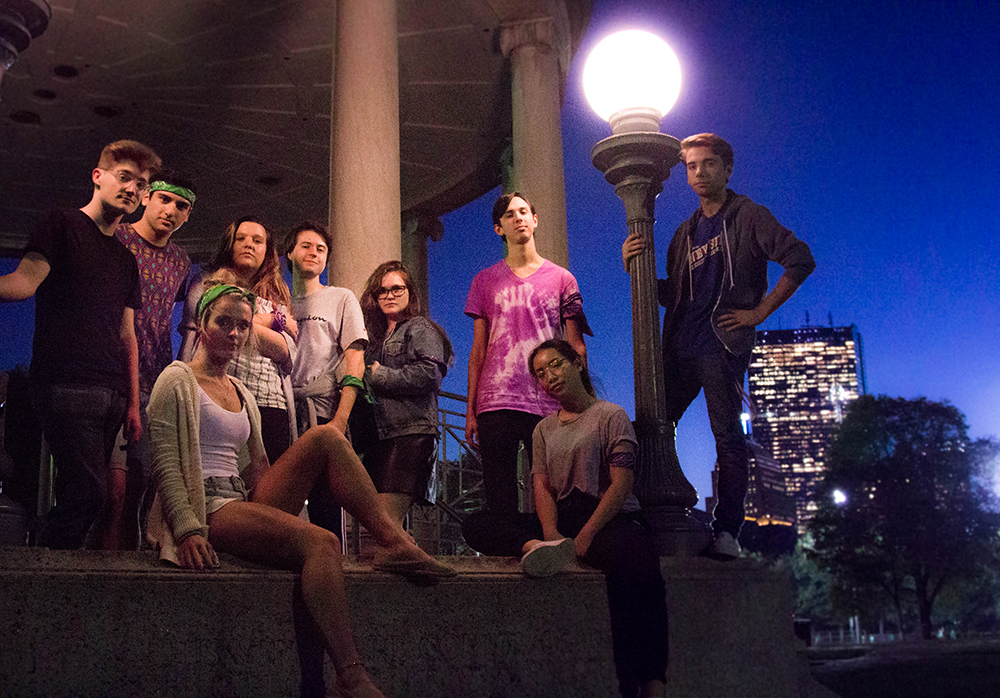 Survivor Boston is not your typical reality show. Instead of competing with complete strangers, you contend with the person two rows in front of you in your film lecture. Instead of tackling physical challenges in a tropical jungle or a sandy beach, you play capture the flag on the Boston Common. Alliances are made in common rooms and communal bathrooms.

Sophomore visual and media arts majors Jacob Falberg and Charlie Welling, two self-proclaimed Survivor super fans, have given the hit reality franchise an Emerson twist with their creation of Survivor Boston. The first four episodes are available on the show’s YouTube channel, and season two is currently being filmed.

The 18 students competing in Survivor Boston face off in weekly challenges that test their physical and mental endurance, and the losing team is forced to eliminate one team member at a “tribal council” session. Contestants are not only competing for the glory that comes with winning the competition, but also for a cash prize of $100.

But because the show forgoes remote islands for a college campus, contestants deal with an awkward social paradigm.

“Instead of the actual Survivor where they’re always competing with nature, rain, and no food or water, we’re competing in a college-like environment where you constantly see the people you may vote off,” Falberg said. “You have to balance your schedule, and you have to find time to strategize with other people. Otherwise you’re going to end up getting voted off.”

The idea for the show came to Falberg and Welling during one of Survivor’s hiatuses.

“We originally thought about making a Survivor club, where people could get to watch the show together and talk about it,” Welling said. “But then we were like, ‘That’s kind of stupid,’ so it evolved from that to, ‘What if we got a group of people together, just to play Survivor?’”

Falberg and Welling set to work and raced to prepare the show in time to have at least half of the spring 2017 semester devoted to filming.

“We went about it extremely independently, because we expected some things to not work,” Falberg said. “We basically asked people to play the game, we got a crew of our friends together, and every time we would do something, it was very experimental, which is why we didn’t pitch it to [Emerson Independent Video].”

Falberg and Welling managed to produce several episodes of Survivor Boston without the financial or technical support of a campus organization. The first episode of Survivor Boston: The Freedom Trail, which was uploaded to YouTube at the end of August, has over 1,600 views. Three more episodes of the season so far are available online.

Filming for season two of Survivor Boston began at the end of September. This season is called Survivor Boston: The Esplanade, and filming is set to span the whole semester. Falberg hopes to upload the first episode of season two by early March.

Thanks to the popularity of the series, Falberg and Welling were able to hold open casting calls to pick their contestants this season, instead of asking their friends to compete. After selecting their cast, the 18 competitors were split into two teams, or “tribes,” like on the original program.

Emily Kidd, a sophomore business of creative enterprises major, is a contestant on season two of Survivor Boston. Kidd is a member of the Makwa tribe, which means bear in the Algonquian language.

She said she was racked with nerves on the first day of filming.

“The first day of filming we went to Paramount, and it was weird because you didn’t know what team you were on, you’re with all these strangers,” Kidd said. “You don’t know if you should be yourself or not be yourself, because you know it’s a strategy game.”

Bailey Dutton, a sophomore comedic arts major, is a member of the Pijaki tribe, which means buffalo.

A self-identified “information person,” Dutton said he has yet to “string a web of lies” in order to advance in the game, but he’s built up a strong reserve of information he can use in the competitions.

Although the season just started, Dutton said he has already learned a lot about his fellow Emerson students through the competition.

“People are more trustworthy when they’re put in a situation where they know nothing,” Dutton said. “The people that I have a lot of trust in, don’t really know a lot and information is a lot more powerful than people give it credit for, in the game and in real life.”