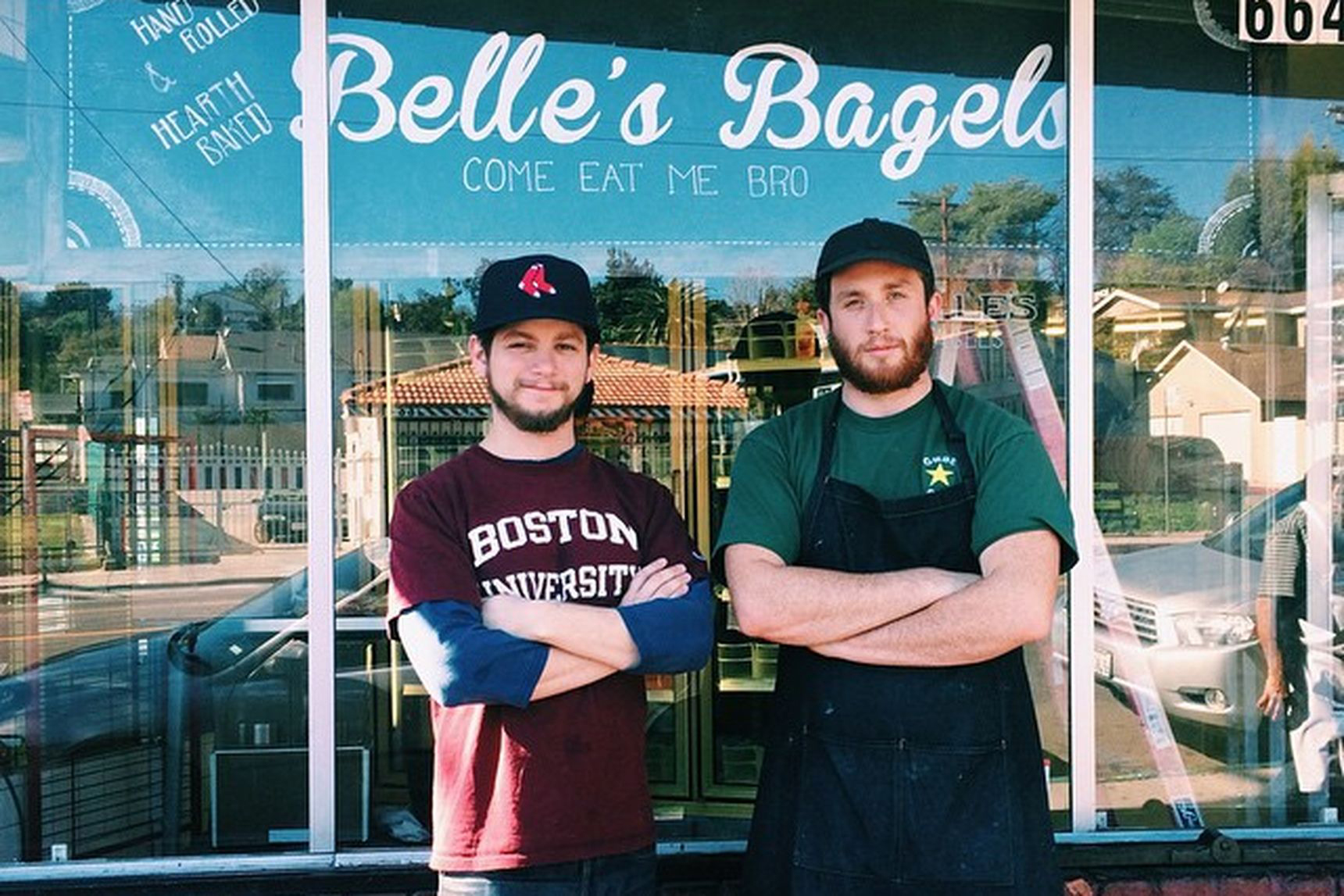 Every graduation card has the same sappy Dr. Seuss line of “Oh, the places you’ll go,” reminding eager graduates that sometimes life takes unexpected directions. When Nick Schreiber, visual media arts major, ‘09, was offered this advice, he knew two things: He was moving to Los Angeles, and he loved bagels.

Dying of thirst in what Schreiber calls the “bagel desert” of L.A., the bread enthusiast opened up Belle’s Bagels in the diverse neighborhood of Highland Park. What started off as a hobby for the days he wasn’t working on film sets has turned into a full-time business.

Schreiber described the transition from film to food as “oddly natural.” He worked at Whole Foods and Zaftigs Jewish Delicatessen during his time at Emerson, and, upon moving back home to L.A. post-grad, he found his way into the DIY food industry by he provided snacks on film sets.

“If you’re good at craft services, you can do no wrong in people’s eyes and people are very appreciative of you,” Schreiber said. “But, I would go home at the end of the day and look at myself and think, ‘I am an adult snack provider’—which isn’t particularly gratifying.”

Seeking a challenge, Schreiber and Belle’s Bagels co-founder J.D. Rocchio started a bagel brunch tradition with their friends. Schreiber said they didn’t think much of the idea when they cooked it up as 25-year-olds. The duo, who have been friends since high school, missed their favorite East Coast breakfast staple, so Schreiber perfected his bagel recipe and they hosted intimate Sunday meals.

Schreiber said he ferments the bagel dough for a solid 48 hours, which is a lifetime compared to other bakeries that proof their gooey goodness for 12–24 hours. The dough, which consists of seven simple, organic ingredients, is then kneaded and hand-rolled into bagel-form. Schreiber said he has it down to a science, and he certainly has had a lot of people to help him with the trial-and-error process.

“At the first one [brunch], we had about 10 people, the next one 50, the one after that 75, and then the last one that we did—which was about 3 years ago—there were like 275 people at my house, most of whom I didn’t know,” said Schreiber.

Food babies swelled in stomachs, the home brunches bred more and more fans, and Schreiber and Rocchio figured they could take this baking to the bank. And the pair had a great business chemistry, said Rocchio.

“A huge part of this project was doing it with Nick,” said Rocchio. “I think we have the foundation for something great. I have experience sending emails and with the enterprise side and he’s the ‘food guy.’”

Schreiber said he remembers thinking that he was on the brink of something big after baking for the masses. From there, Belle’s Bagels was born in the window on the front of the Hi-Hat, a music venue, at 5043 York Blvd. Rocchio and Schreiber approached the owners of the club and asked if they could rent out the space during the day, and they enthusiastically agreed.

The only problem with the space is that, well, it’s a vending window outside of a nightclub. Schreiber said that the kitchen is about the size of a small New York apartment, and nearly impossible to bake bagels in. The kitchen where Schreiber and his assistant bake the bagels is three miles away from the window. So, every morning at 2 a.m., Schreiber drives to the bakery and starts hand-rolling each bagel for his 8 a.m. opening. Lucky for Schreiber, he’s accompanied in the wee hours of the day by a fellow Emerson graduate, Rae Bourque.

“Working with Nick is a blast,” said Bourque, who graduated in 2012 with a degree in writing, literature, and publishing. “As an Emersonian, he has such a strong work ethic and knows how to work as a team.”

Bourque discovered Belle’s Bagels from a job listing Schreiber's girlfriends posted in an Emerson Facebook page and applied right away. Today, her foodie duty entails preparing the toppings, heating the ovens to the proper temperatures, and baking the bagels. She describes this work as a “zen-like process.”

“Being a baker is 50 percent science and 50 percent black magic,” Bourque said.

The hours are grueling, though, and Schreiber said he has had to overcome major space limitations since venturing into the pop-up shop world.

Schreiber said he finds himself using skills he learned at Emerson every day at Belle’s Bagels. Though he may have traded in his gaffer gloves for an apron, he owes his work ethic and determination to his college habits.

“Being at Emerson teaches you how to work from the ground up, and really put all your energy into what you’re passionate about,” Schreiber said. “You have to put yourself out there and create something—which is what you have to do in the real world.”

He said he continues to put himself out into the creative world, but through a different lens. Belle’s Bagels has a somewhat small menu, but what it lacks in options, it makes up for in innovation and ingredient integrity. Customers can choose bagel combinations like Beet Schmear or Cultured Cashew Schmear (for the L.A. vegans) on dense, seedy bagels. Schreiber recommends the McB sandwich: plain cream cheese, lox, red onion, and capers.

“The McB is my shining star,” said Schreiber. Not only is it his favorite flavor combination and the bakery’s best-selling sandwich, but also, the breakfast only sets customers back $7. To put it into perspective, Schreiber estimated it’s an average of $11-$13 anywhere else.

“That’s where you can see all my hard work put into one item,” said Schreiber. “We manage to make it work and still use the best ingredients possible. People are very appreciative of it.”

What Schreiber appreciates, though, is when people give him feedback. After being a film student at Emerson, he’s no stranger to taking criticism and creating something positive from it.

Schreiber said the influx of ex-New Yorkers seeking refuge in sunny Los Angeles has inspired some snarky online reviews. “Liz F.” from Los Angeles let all the Yelpers know that she was not happy with the place. “Probably the worst bagel I've ever had. They need to go to NYC and take lessons. Giving it a one because the people are nice.”

Yes, Schreiber is very nice indeed. In fact, he’s so nice that he doesn’t promise his customers a New York style bagel because that was never his goal. He said that he knows he can’t compete with the emotion and nostalgia someone feels when they were in snowy New York City, wandering around, eating the quintessential New York treat.

“I didn’t want to set people up for disappointment,” said Schreiber. “So, we decided to hybridized the two styles [New York and Montreal] and made our own bagel.”

Looking back on the past five years since graduating Emerson, Schreiber said he never anticipated his life taking this turn. When he received his diploma in 2009, he planned on living in L.A. and working on films like he always set out to do. He said that while he’s focusing all of his energy on Belle’s Bagels right now, he isn’t ruling out getting back into the film industry.

“I can always go back to working in film whenever I want to and I have Emerson to thank for that,” Schreiber said. “It’s nice to have that community and support system—the Emerson Mafia is alive and flourishing in Los Angeles.”

If you’re in the L.A. area and looking for your bagel fix, Belle’s Bagels is open Thursdays and Fridays from 7 a.m. to 3 p.m., and Saturdays and Sundays from 8 a.m. to 3 p.m (or until they’re sold out, and they will sell out. In fact, they sold out 2.5 hours after opening one Saturday morning. So give them a call before you sit in L.A. traffic, only to find that your McB craving won’t be satisfied).