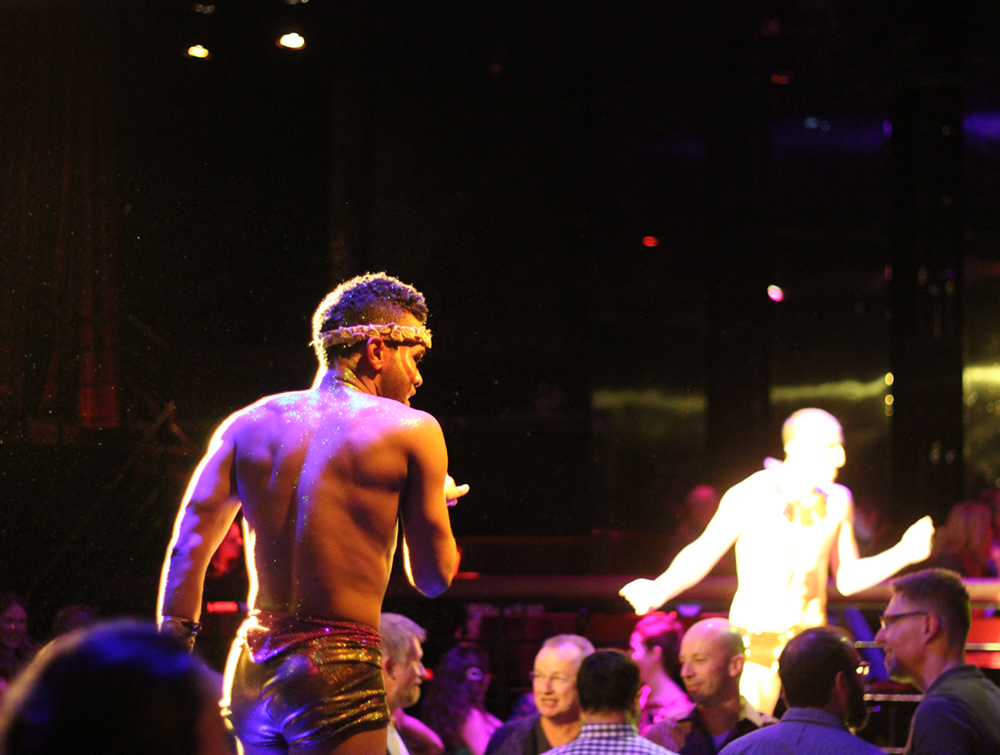 In Cambridge, inside a club on Arrow Street, amidst disco lights, glitter, and dancing, lies a Shakespearean world with a ‘70s twist.

It’s called The Donkey Show. The interactive adaptation of A Midsummer Night’s Dream has become a trend among students, past and present. In the six years it’s run at Harvard Square’s Club Oberon, about 10-15 Emerson community members total have worked there, according to Taylor Adamik, the show’s production supervisor. In total, the performance, produced by the American Repertory Theater, has a cast and crew of about 30 people, she said.

The show, performed twice every Saturday night at 7:30 and 10:30, takes Shakespeare’s characters and revitalizes them with a new look, talk, and even genders and names in some cases. It nixed the Elizabethan dialect, but the original love-triangle plotline is still the meat of the story.

The remixed comedy play is about two couples who get mixed up with each other after a mysterious mischief drugs them. By the end of the show, two twins are turned into a donkey, and a king-of-sorts hatches a revenge plan against his flirtatious lover. The characters are depicted as fellow disco club goers, and the audience is immersed in the action— an appealing aspect to college students involved, Adamik said.

Michelle Martinelli, a spring 2015 performing arts graduate, said when she first started attending the comedy-turned-dance-club show in fall 2013, there was only one Emerson student in the cast.

She said she fell in love with the show and was hired as an understudy for Helen/Vinny. Because most of the actors hold the roles of multiple characters, she was able to play both a member of the love triangle and a twin, inspired by Shakespeare’s Helena and Nick Bottom, respectively. She said she soon took over the roles of Mia, aka Hermia, and Oberon, a fairy king turned club owner.

It was thanks to Martinelli that Danny Dranoff, a senior marketing communication major, got wind of the show in 2014. He said because he had been mixing music since high school and held a special childhood love for disco, he jumped to audition for the fictional club’s disc jockey, Oscar Barowski.

“The DJ has to be kind of ambiguous—you’re not sure where he’s from and what he’s getting at,” Dranoff said in a phone interview. “The [persona] I went for was like euro-trash, ‘70s DJ. I had to wear sunglasses indoors and grow out a beard. The coolest part of the role is that people from class didn’t recognize me until I looked at them and hinted.”

Dranoff said he soon paid it forward when he and Martinelli got their close friend, Maxwell Enright, a junior visual and media arts major, to audition for the same mysterious role. Enright, who is currently involved in the production, said his favorite part is to look down from the DJ booth and enjoy the crowd’s faces throughout the night.

Allister Baudoin, a former senior communication studies major, first saw the show because his close friends were involved. After mentioning to cast members inside that he felt a strong connection to the troublemaker of the show, Dr. Wheelgood, they pushed him to audition. Baudoin said he unfortunately had to move out of Boston for family reasons before he could graduate or have his first performance as Oberon’s drug dealing, mischievous righthand man on wheels.

“[Wheelgood’s] kind of the guy who gets in for free and does whatever he wants,” Baudoin said in a phone interview. “He’s Puck from A Midsummer Night’s Dream, except it’s a ‘70s fantasy world so it’s super darker than a Puck. He’s like [Dr. Frankenstein’s] Igor to Oberon.”

Throughout the night, audience members are dragged into the plot. Oberon, the fictional owner, stirs up trouble between the clubgoers through drugs that Wheelgood deals. Similarly to Midsummer’s romance magic, the drugs make the user fall in love with whomever they see first. It causes problems in the relationships of Helen, Dimitri, Mia, and Sanders, and causes Titania to fall in love with the donkey-turned Vinnies.

“The idea was to make Shakespeare accessible to younger audiences and to make it an immersive experience,” Martinelli said. “If you’re paying attention, the whole story is there. The story is happening entirely around you.”

The performance is not shy about crossing visual boundaries, either— its design uses strobe lights, glitter, and hundreds of paper butterflies falling from the ceiling. These groovy effects are paired with blatant sexual innuendos, risque dancing, and costumes that near nudity, which explains the club’s 18 plus requirement for audience members.

Cast members have intense rehearsals to get all the timing and props completely right, Dranoff said. Baudoin, who only experienced the practices, said it’s all worth it for the magic of the show.

“They bring you in and you have no clue it’s this interactive theater experience,” Baudoin said about his first time ever attending. “I specifically remember this one part where this [actress] grabbed me, pulled me into the middle of the dance floor, and pointed upwards just as all this confetti and glitter fell. I was like, ‘Oh my gosh, this is the happiest, most gay world I’ve ever been in in my entire life.’”

For Shakespeare classicists, the idea of this sensual, explicit fantasy world may be absurd, but Dranoff and Baudoin said it makes complete sense to them. Disco music’s rhythm and emotion are comparable to poetry, and the raving atmosphere of a club can have a magical, surreal vibe, they said.

Lucie McCormick, a junior visual and media arts major, attended The Donkey Show a few weeks ago and said the experience was more intense than she expected.

“It was insanely fun and it was really cool to see them put on a performance in a way that they can interact with the audience,” McCormick said. “My favorite part was probably either the DJ or the lady with the butterflies on her breasts. It’s really vibrant and felt really positive.”

As all good shows come to an end, so do Emerson students’ careers with The Donkey Show. Although Enright still DJs with the production, most are alumnus now. Dranoff moved away from Boston after a year-and-a-half-long stint, and Martinelli was involved for two years. Baudoin didn’t participate because he moved away. They all said they, and other former Emerson performers, miss the energy of the atmosphere.

Dranoff started taking his classes at Emerson remotely in California a few months ago and has been on the prowl for something similar in the area, but ultimately is still unsatisfied, he said.

“I think just being apart of this movement of immersion in art [is my favorite part],” Dranoff said. “It’s really just getting to be a part of one of these projects firsthand and to see how it can really make an entire group of people come together over just a theme rather than them sitting in a chair dozing off and watching some actors play some parts.”

Baudoin said the cast became close really quickly, and he wouldn’t give up the experience for anything.

“It’s kind of like being a part of such an eccentric thing is fun, but it’s also like a family in a sense,” Baudoin said. “It’s kind of overwhelming, but then you get used to it. I didn’t go [to rehearsals] because I wanted to be in the show—I mean, I did—but the main reason I went was because I was having fun.”