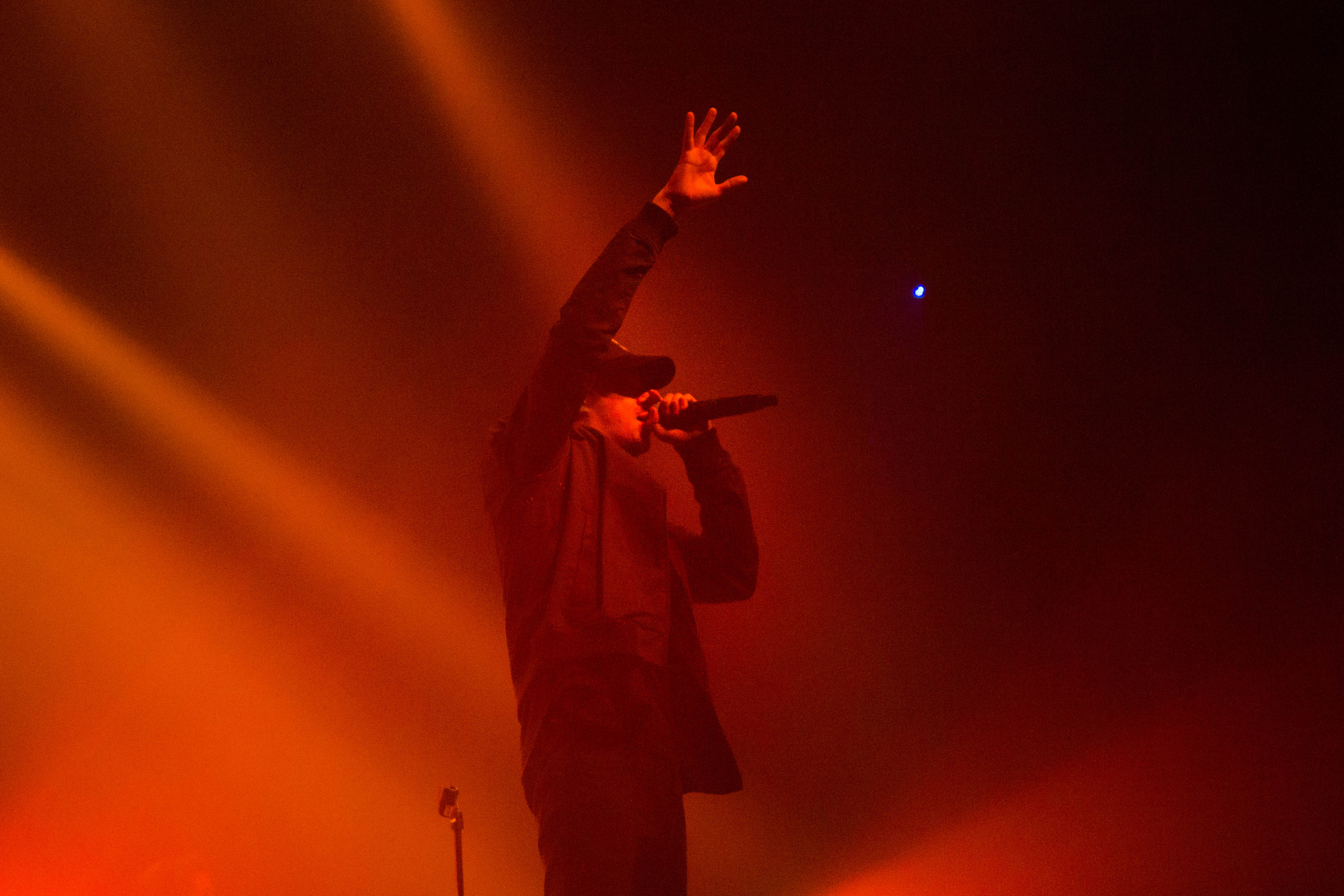 But this past Sunday, the joke became a reality. Known by his new stage name Cab Ellis, the junior performing arts major performed in front of roughly 200 people as an opener for rapper and Emerson alumnus Watsky, ‘10, at the House of Blues Boston.

“It was by far the biggest crowd I had performed in front of,” Abeles said. “It was unreal.”

“[Watsky] responded and gave a lot of feedback,” Abeles said. “From the get-go, he was very interested and very willing to give me feedback.”

“I thought [his music] was dope,” Watsky said. “I thought he had great lyricism and a really cool musicality, and the beat was awesome. I was really impressed with it right away.”

During the summer, when Abeles saw that Watsky’s x Infinity tour was coming to Boston, he emailed Watsky on a whim asking if he could perform a short set. When Watsky replied, Abeles had secured 15-20 minutes of stage time at the top of his House of Blues show.

But this wasn’t Abeles’ first experience performing before a well-established headliner. Last spring, Abeles opened for 2 Chainz at Babson’s Spring Concert in front of close to 100 strangers. Abeles said he got the gig through a friend who was a DJ at the event.

Watsky said Abeles is in a similar position to where he was during his time at Emerson—gaining experience by playing local venues and opening for other artists. Watsky said he told Abeles to keep making music and to continue putting himself out there.

“Connor definitely has a lot of raw skills and is musical and a good performer,” Watsky said. “So I don’t think there’s any limit to what he can do as long as he just keeps working hard and does his thing and stays true to himself. I think that there’s no ceiling to it at this point.”

Abeles said he hopes to emulate Watsky’s career. While at Emerson, Watsky performed slam poetry at college campuses across the country and won the Rod Parker Playwriting Award. Now the interdisciplinary graduate has released four studio albums, and his tours have taken him around the world.
“That’s something that I love about music. There could be people around the world who you don’t know and could never meet who are listening to your song,” Abeles said. “That’s my biggest goal—to be able to travel the world and share my music with everybody.”

Abeles’ rap name, Cab Ellis, is a play on his nickname “cables,” a contraction of his first and last name. Abeles said he assumed the new name after he graduated high school and started to pursue rapping as more than a hobby.

“I’ve started to get a lot more serious about it and I’ve really started to focus on more things besides just saying words and saying them fast,” Abeles said. "Now it’s about what exactly I’m saying and how I can say it the best in order to maximize the meaning for me and for everybody else who’s listening to it.”

Abeles sells T-shirts and tickets to his live performances at Boston venues like the Middle East and Hard Rock Cafe. But he said he releases all of his songs online for free and pays to produce his music out of his own pocket. He currently has 20 songs available on his SoundCloud account, which has 390 followers, and his track “Drive With Us” has over 106,000 plays.

Abeles, a frequent participant in student theater, also performs with the dance-theatre company Paradise Lost and Emerson’s long-form improvisational comedy troupe This is Pathetic. Abeles said he considered studying music at Berklee College of Music but found that pursuing improvisation, comedy, and acting at Emerson is beneficial to his music career.

“It’s helped me loosen up a lot, you know, not take myself too seriously because I’m such a perfectionist and I’m so meticulous about things,” Abeles said. “At a certain point you have to be willing to improvise and stumble upon things and discover things.”

Abeles said acting has also helped him connect with the audience and to develop his stage performance style, which he describes as ‘do-it-all’ and ‘nuts.’

Although many of Abeles’ friends populate his shows, Abeles said he has interacted with new fans both in person and online, with some even continuing to follow his career.

“There are people across the country that have tweeted at me asking when I’m gonna drop new music, which is crazy,” Abeles said. “It’s just been cool hearing people that comment on a song or tweet at me or message me especially if I don’t know them. It’s really meaningful to see that what I’m doing is impacting somebody in some way.”

Alexander Tsipis, a junior business administration major at Northeastern University, said he has been a Cab Ellis fan since he saw Abeles perform last spring at Hard Rock Cafe Boston. Tsipis said he immediately loved Abeles’ lyrics, flow, and upbeat performance style. When he approached Abeles after the performance, Tsipis said he found Abeles’ friendly personality to be refreshing.

“It’s not very often where someone will perform and then kind of just hang out in the crowd and start talking to people and engage them in conversation,” Tsipis said. “You start a conversation with him and he’s really interested in you as a person also.”

Abeles is currently working on an untitled mixtape of 15 songs spanning subjects on his childhood, his rap career, his relationships, and his own personal struggles.

To help fund the upcoming mixtape, Abeles said he made his latest single “Bounce” available on iTunes for 99 cents, but it’s important to him that fans can still listen to the track for free on Spotify and SoundCloud.

“I think you can’t sell music and you can’t make people pay for things until they’re willing to or until they respect what you do,” Abeles said. “I think music should always be accessible to everyone.”

For the project, Abeles is collaborating with producer Andres Farias, a junior contemporary writing and production major at Berklee College of Music. Farias records and produces Abeles’ vocals at the home studio he runs out of his apartment, complete with an acoustically treated room and professional equipment. Farias, who has recorded artists like rapper Riff Raff, said he is selective with who he chooses to work with.

“I have to obviously love their personality and their professionalism and work ethic,” Farias said. “[Connor] shows up rehearsed. While working he’s focused so that’s why I really like working with him. He’s a good guy.”

Abeles said his new project is much more introspective than his previous work and he hopes to make his own specific problems universal.

“[I] think there’s something special in channeling your inner self and making that applicable to everybody else,” Abeles said. “So that’s a challenge, but also something that’s very important to me because I want to have a diverse demographic. I want to have people that like different music start to appreciate hip-hop and bridge into this genre.”

Abeles said he wants to continue acting but that music is now his priority. Abeles said what he values most in himself and other artists is enthusiasm and a love of their craft.

“Even if I’m not a huge fan of what it is specifically that they’re doing, if I can see that they care, then I inherently respect that,” Abeles said. “I just hope that people can feel the passion and feel how much I truly care about what I’m doing.”