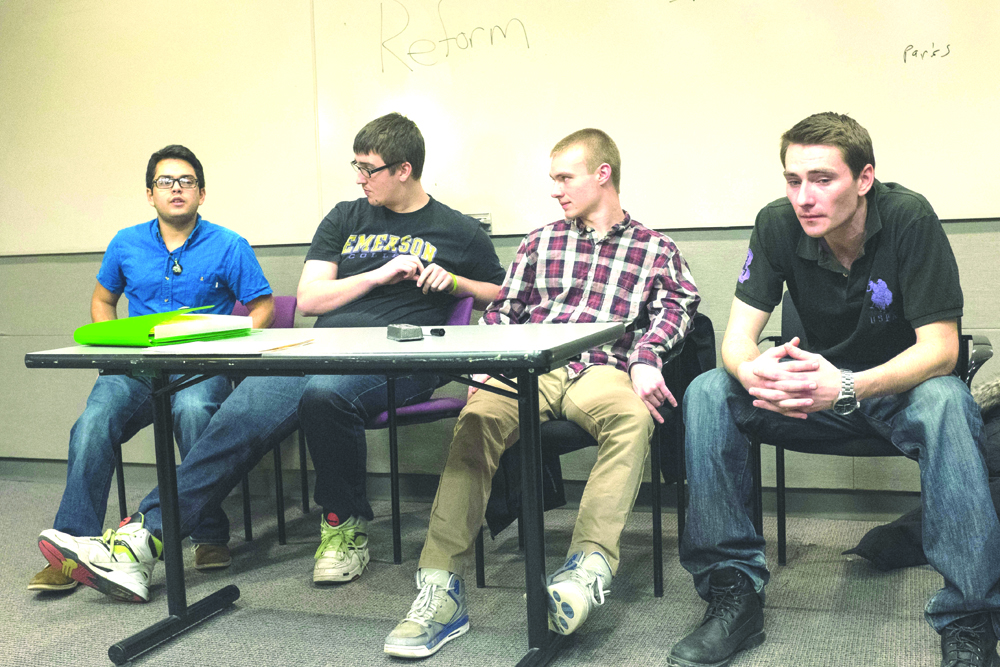 Before Nov. 11, 2013, Jeffrey McHale said he couldn’t sleep full nights or stomach more than an appetizer at dinner. His lack of appetite made his weight fluctuate severely — during a three-month time frame, he said he lost more than 45 pounds.

These are long-term side effects of Adderall, a drug prescribed for attention deficit hyperactivity disorder that the sophomore visual and media arts major said he has been taking since he was 12 years old. In fall 2013, McHale ended his sleepless nights and weight instability when he went to his doctor and got a medical marijuana license in Massachusetts. He said by adding marijuana to his medical regimen, he can sleep full nights and eat full meals again.

“Once I started using, it made me feel normal again,” said McHale, the president of Emerson Reform, a campus organization founded in 2009 focused on drug education and policy. “I could fit in again in a way that was taken away from me.”

The only problem is McHale can’t use his medicine on campus. Currently, the college doesn’t distinguish between recreational marijuana and medical marijuana use, according to the school’s drug policy. In Emerson’s eyes, McHale isn’t treating a medical problem when he lights up a joint; he’s just getting high.

McHale said he moved off-campus in April to live with a friend in Jamaica Plain so he could use his marijuana in a private residence. But McHale said he is still paying for the required on-campus housing, plus his apartment’s rent.

Medical marijuana was legalized Nov. 6, 2012 in Massachusetts, but the college prohibits being under the influence of any illegal drug, including marijuana, according to Emerson’s drug policy.

This leaves students with doctor-issued licenses in a bind, because there’s no convenient place for them to use the drug even if they have a card to wave. Medical marijuana students can’t use anywhere on campus, or in public spaces like the Common, without risking repercussions from the college or state law.

McHale and fellow Emerson Reform members have started an initiative to help students use their medical marijuana in a way that doesn’t violate Emerson or state regulations.

The group is proposing a change in the college’s policy that would allow students with medical marijuana to break the housing contract and move off-campus so they can self-medicate on their own grounds.

“I want to be in a place where I can take the medication that allows me to live my life in a productive, non-debilitating way,” said the sophomore performing arts major, who declined to share the details of the health condition requiring treatment from marijuana because he said he is uncomfortable publishing his medical history.

Students who request a release from housing must complete a packet from the Disability Services Office, which requires documentation from a professional giving a clear diagnostic statement of the student’s disability or illness, and schedule an interview before a decision is relayed to the Office of Housing and Residence Life and the student.

Gutierrez provided the disabilities office with a formal recommendation from a general care physician in Massachusetts to use medical marijuana, but was unable provide documentation from his primary care physician of a formal diagnosis of his medical condition, or a recommendation to use medical marijuana to treat the condition, according to emails between Gutierrez and Matt Fisher, assistant director of disability services.

Students have the right to appeal through the standard grievance process if they are unsatisfied with the board’s decision on their request, according to the disability services office’s statement of policies and procedures.

Gutierrez said he spoke with Fisher after the decision and chose not to appeal because his impression was that it would not be successful.

Emerson Reform hopes to present its proposal to the administration by the end of spring semester, McHale said.

Students entering Emerson as freshmen are usually required to live on campus for their first four semesters, with one exception being a proven disability that would preclude the student from living in the college’s dormitories, according to the school’s housing policy.

David Haden, associate dean and former director of housing and residence life, wrote in an email to the Beacon that each student housing release request is reviewed critically and thoroughly in accordance with applicable federal and state laws. He said he could not discuss any specific student cases.

Under federal law, marijuana is still a Schedule I drug, regardless of state rulings of medical marijuana legalization. Emerson, like most higher education institutions, is in an awkward position because the college is federally funded through student financial aid and research grants, and therefore is subject to federal regulations such as the Drug-Free Schools and Communities Act and the Drug-Free Workplace Act, according to the college’s policy on alcohol and other drugs.

Emerson Reform hopes to team up with Emerson Polling Society to find out how many people would support a change in housing policy and the prevalence of students with a medical marijuana license on campus.

“Obviously the student body will support us,” said McHale. “We’re taking our time, getting this poll done and getting our research done. If we frame it in this way, it will be hard to say no.”

Emily Abi-Kheirs, a junior visual and media arts major, and Emerson Reform member, said this initiative, like many of the projects the organization takes up, is about breaking the drug taboo and starting a dialogue on campus. She said she believes the school is hesitant to make the change because administrators are concerned about its reputation.

“I honestly think the school is worried about its image,” said Abi-Kheirs. “It shouldn’t have to be something we are skirting around. In an ideal world, taking your edibles should be the same as taking your insulin or taking your pills. It’s just the same as other medicines.

Gutierrez said he believes his choice of medicine is not yet taken seriously at Emerson.

“I feel that any medical need or recommendation should be looked at with an equal lens,” he said. “Especially when the law in the state allows me to.”

Abi-Kheirs said Emerson Reform’s initiative aims to break down the cloudy stigma surrounding medical marijuana patients and this change in the school’s housing policy is the first step for the community.

Twenty-one states have legalized medical marijuana, and Abi-Kheirs said more colleges will be encountering this friction between school policy and state law, so Emerson should lead the pack.

“Laws are changing all across the country,” said Abi-Khiers.  “We just need to be the progressive school Emerson claims to be.”

A previous version of this article misstated the classification of marijuana under federal law. It is considered a Schedule I drug.