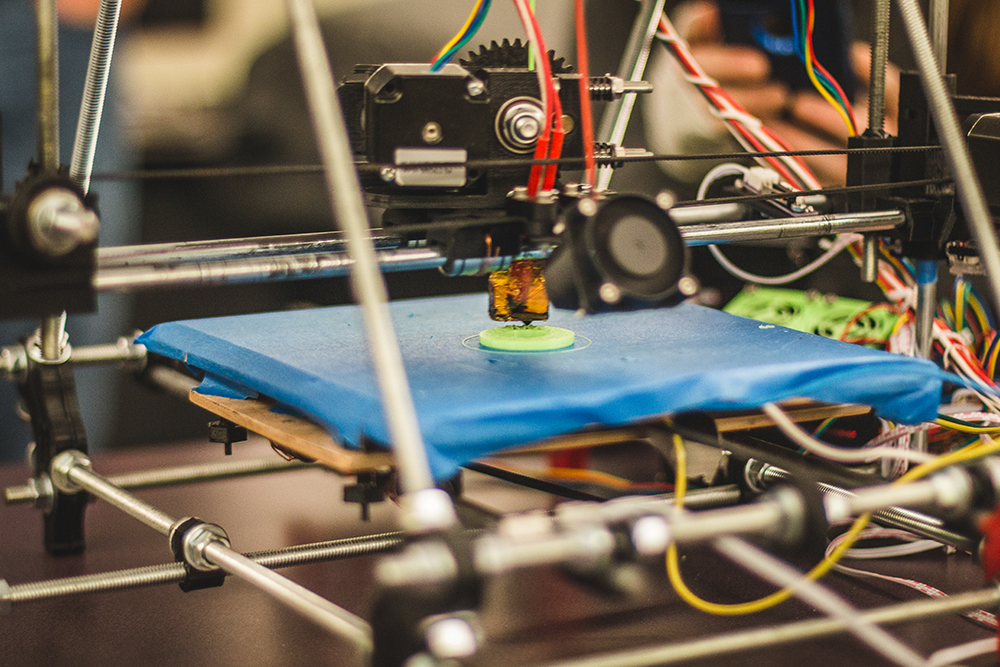 On top of the standard-issue wood dresser in an otherwise unexceptional Little Building dorm room lies a device unlike anything else that exists on campus — or the world. Its owner, sophomore Dan Barkus, would know. He made it.

Composed of a handful of interlocking metal rods, a rainbow swirl of wires, a half-dozen small black boxes, and one particularly bright green gear, the machine is a 3D printer, a tool that can build nearly any imaginable shape. It takes a filament of plastic 1.75 mm in diameter, heats it to a temperature of over 440 degrees, and squeezes it at 30 mm per second through a computer-guided nozzle, which moves along three axes to a precision measured in the millionths of meters. Barkus’ desk is littered with a melange of 3D-printed creations: replicas of movie characters like Yoda and Wall-E, various real and imaginary animals, mechanical trinkets like chains and a ball bearing, and even bins to hold them all.

Although 3D printers are becoming increasingly common in the US — Staples recently began selling them in stores, and MakerBot, a company that specializes in 3D printers, opened a retail outlet on Newbury Street in November — there’s no model exactly like Barkus’. This semester, he created and assembled his own design, a custom combination of elements curated from what he described as a thriving online community of 3D printer enthusiasts.

“A lot of it was taking parts from one, parts from another, and just getting them to work with each other,” Barkus said.

The impetus for making it came from his Advanced New Media Projects class: For its semester-long assignment, for which other students are making video games, creating animations, and experimenting with augmented reality, he decided to build this printer. But it’s really the culmination of a desire Barkus has had since he was young.

“When I was a kid, growing up, I’d always liked building things,” he said. “Some things, I just couldn’t make them — I didn’t have what I needed to make them.”

When he was about 14, a gear in one of his favorite toys broke, rendering the whole thing useless. He recounted trying to attach metal pieces to where the teeth had ground down, then trying to make new gears out of clay or wood, but nothing he could find seemed to work.

“If I had a 3D printer back then,” said Barkus, “I could’ve sat down and taken two or three hours and had everything working as good as new again.”

For Barkus, the tinkering instinct runs deep. His father is a software engineer. As a child, he built model planes and cars, and routinely played around with electronics. He eschews Apple products because he says they’re too locked-down, and instead has put together his own computers—including the one in his dorm room. He has four Rubik’s Cubes on top of his closet, all with different shapes and numbers of faces. One of his greatest delights, he said, has long been to take things apart, figure out how they work, and put them back together.

This worldview, of seeing objects not as mysterious mechanisms but as deconstructable systems, is key to Barkus. And from it stems what he calls one of the most useful skills in life: being able to see something that’s broken, grasp how it’s supposed to work, and fix it.

“Once you look at it, you realize everything is just a whole bunch of real basic things that work together to make these super complex things,” he said, “which is, in my opinion, just one of the coolest things there is.”

But Barkus is not only interested in the mechanical side—another one of his passions is animation, which is his concentration at Emerson. Though he said he’s not the most artistic person—and sometimes even asks himself why he came here, instead of Northeastern University or Rochester Institute of Technology, the other two schools he applied to—he said he enjoys seeing what can emerge from novel combinations of technology and art.

“It’s kind of cool to get this mesh of people working together, people with the more technological, the more mechanical side working with these artistic people,” Barkus said, “and that’s what I really like about Emerson.”

It’s the combination of those two perspectives that led to Barkus creating his 3D printer from scratch just weeks ago. Over spring break at his house in Tolland, Conn., he finalized his plans and ordered parts from eBay. Until it was completed, he said his friends and family were skeptical. His mother asked what he would do if it didn’t work, since this was his only major assignment for his Advanced New Media Projects class.

One of his roommates said he would give Barkus $25 if he succeeded.

Barkus designed the printer to be cheap to assemble. His key insight was using imperial units instead of the metric dimensions that many other plans rely on, because in the US, it’s much easier and more economical to find parts measured in inches, not centimeters. The materials and shipping only cost $350, he said, compared to the thousands of dollars that commercially available printers typically cost. MakerBot’s line of 3D printers, for example, run from $1,375 to $6,499. He assembled the printer when he got back to Emerson over a period of just 15 hours, even using the 3D printer of his Advanced New Media Projects professor, John Craig Freeman—a MakerBot Replicator 2X—to create certain custom joints.

“Really, it’s not something that’s difficult to put together,” he said. “It’s much simpler than a lot of people would believe.”

In some ways, he said, 3D printers epitomize Emerson’s motto of bringing innovation to communication and the arts. He said he hasn’t yet used his 3D printer for any purely artistic projects, but he easily rattled off how 3D printers can be—and have been—used in the media: making custom props, fabricating models for stop-motion animations, creating specialized camera rigs.

He has started experimenting with using the printer to make music, by calculating how fast the motors would have to spin to play various notes. Two visual and media arts professors, Freeman and Anya Belkina, own 3D printers, and are looking at ways to expand their use in the VMA curriculum.

“We are trying to get something going,” Freeman wrote in an email to the Beacon.

Although Barkus called 3D printing just a hobby, he often talked about his ideas for the future. He plans on releasing the schematics for his machine once he has thoroughly tested it, following the ethos of openly collaborating and sharing information that he said is prevalent in the 3D printing community. He has started thinking about ways to improve the design for version two, including making it foldable and thus more portable. Eventually, he hopes to make money by building 3D printers for others.

“Technology is—I don’t want to say it’s what I live for, but it’s a big interest in my life,” Barkus said. “That desire for seeing it move forward is really what drives me to do things like this.”