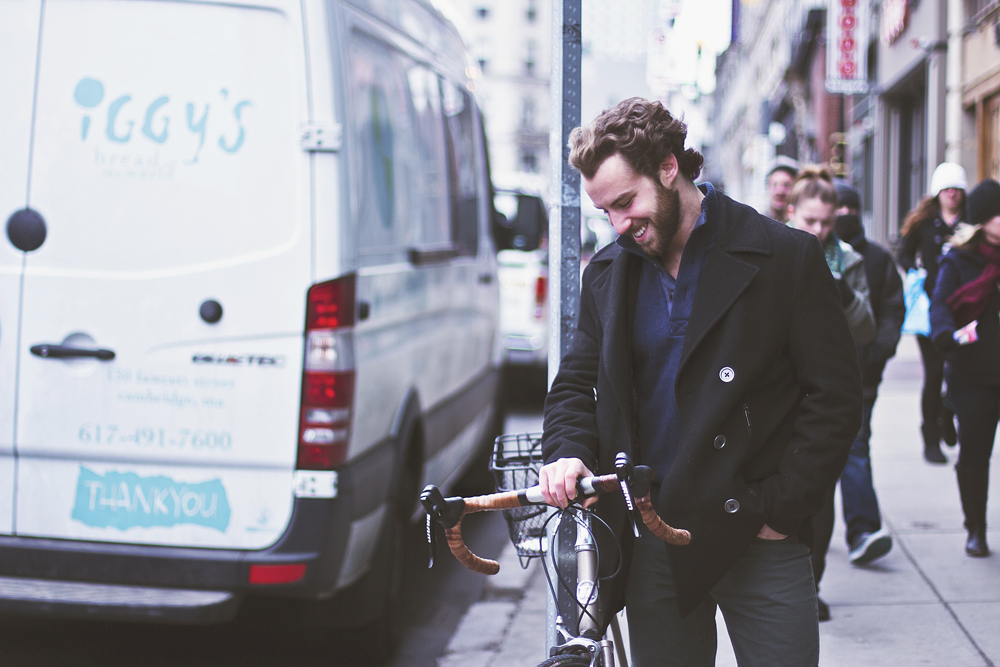 It was Thanksgiving Day and the sun was high overhead when Greg Auerbach slowed his pedaling and stopped his bicycle on the roadside. Sitting on his bike seat with one foot bracing him on the dirt curb, he said later, he pulled his OneTouch blood glucose meter out of a bag on his handlebars. He pricked a finger and put a drop of blood on a test strip. The meter beeped and the number on the screen read 60 — he was low.

He found a bag of peanut M&Ms, and at the side of the hot, stretching Arizona road, he said ate the candy to get his blood sugar levels back to normal so he can keep biking to California.

Auerbach was diagnosed with Type 1 diabetes when he was four years old, and at age 23 he became the first person with the chronic disease to bike across the nation in solitude. On Oct. 5, 2012, he left his hometown of Jenkintown, Pa. and headed west to raise money for diabetes research.

“It was a childhood dream,” said Auerbach. “I had to do it. I felt the need.”

Fifty days, 3,363 miles, 13 states, and four flat tires later, Auerbach reached the Pacific Ocean. He raised over $4,000 in donations from individuals and companies for the Juvenile Diabetes Research Foundation.

While pedaling and checking his blood sugar, Auerbach was also filming his experience traversing America for a short documentary.

This spring, he transferred to Emerson to pursue his passion for storytelling in film, and is currently a junior visual and media arts major.

“It’s our experience that shapes who we are, and I wanted to tell mine,” said Auerbach, a wide smile stretching across his bearded face.

His documentary will be shown in April at Rockin Docs for Diabetes Cure, an annual fundraising event in Philadelphia.

Type 1 diabetes is a lifelong disease in which a person’s pancreas stops producing insulin, a hormone responsible for regulating the body’s blood glucose levels. Auerbach lives with Type 1 diabetes by testing his blood glucose about 10 times a day, administering insulin through a pump, visiting his endocrinologist regularly, and keeping fit, he said.

Auerbach averaged 70 miles a day on his Surly bicycle, weighed down by 60 pounds of supplies, including clothing, toiletries, medical supplies, and sugar for correcting lows, and he arrived at Santa Monica Pier on Dec. 1, he said.

“I pushed myself really hard — I had to reach my destination,” said Auerbach. “I almost felt like I wasn’t a diabetic because I was burning so many calories and I didn’t need to take insulin for meals sometimes.”

His mom, Lisa Flaherty, met him at the finish line in California. Flaherty, who is a pediatrician and diagnosed her son’s diabetes, said although she was worried about his health and safety, she knew he needed to embark on this adventure.

“He’s always felt chained down by diabetes,” said Flaherty. “In some ways, he is. He’s dependent on the medication and supplies, but he’s never felt bad for himself or shown self pity.”

Auerbach said he captured the experience on film to motivate others to test their personal limits, Type 1 diabetics or not. He received a small grant from the JDRF, but mostly funded the trip through his own earnings.

He kept an HD Panasonic HC-V700 camera in a bag on his handlebars, he said, and documented everything he saw — getting routed to cross an unfinished bridge in West Virginia, visiting his old fraternity at Gettysburg College, dancing beneath St. Louis’ Gateway Arch, and the countless curious dogs that followed him in nearly every state he crossed.

He was collecting footage for his film, but the camera acted as more than a digital journal — it gave him a feeling of companionship during his long solo journey.

“It gave me a sense of comfort to talk to the camera,” said Auerbach. “People say happiness is shared, and I wanted to share it with my friends and family.”

While Auerbach was on the road, his friends and family could join him virtually. He enabled Google Latitude on his smartphone, which allowed his progress to be tracked on an online map. He also updated his locations with regular blog posts on his website, bikefordiabetes.com. Auerbach planned his route beforehand, but said he mostly took the trip town by town, improvising if needed.

Auerbach said he spoke with his dad nearly every day on the phone, who would look ahead for roadblocks and help keep him on track. He said his dad is also an avid cyclist and visited him in Arizona, where they biked the rim of the Grand Canyon.

“He was my eye in the sky,” said Auerbach.

Even though his dad was looking out for him, while making his way through Illinois, Auerbach said he got stuck in a lighting storm. He had to get off of his bike, and shrink his 5-foot-9-inch frame flat against the ground at the curbside.

“I was the tallest object for miles,” said Auerbach. “I felt completely helpless. There was nothing to protect me in the moment. It was like swimming in the ocean and being surrounded by sharks.”

There were high points to match the low points, though, Auerbach said. In St. Charles, Mo., he met a newly married couple at a brewpub one night, and over a few drinks at the bar, Auerbach explained his trip. When he returned from the bathroom, the couple was gone and his check was paid.

The idea for the trip had been brewing in Auerbach’s head since he was in high school, said his best friend, Rob Frisbie.

“It’s always been in the planning,” said Frisbie. “He needed the opportunity to connect with himself.”

Frisbie said he has known Auerbach since pre-K. Growing up with a diabetic friend meant Frisbie not only learned to be dialed into Auerbach’s emotional highs and lows, but he said he can sense when his friend’s blood glucose levels are dropping. He saved Auerbach from a hypoglycemic attack last summer. Auerbach was unconscious, and Frisbie carried him to his car and helped him swallow soda until his levels came back up.

In high school, Auerbach and Frisbie took a film class together.

“Labeling him as a storyteller is an understatement,” said Frisbie. “You can tell he has this innate talent for sharing stories. It was so clear that this was what he wanted to do.”

Flaherty said her son’s interest in the silver screen started at a young age.

“He’s been making home movies since he was a little guy,” she said. “He would spend the day making clay animals for claymations or putting on skits with friends.”

Auerbach worked on a Lifetime film and The Way Way Back in 2012, he said, but he got to tell his own story this time. His trip across the nation was the greatest experience of his life, he said.

Type 1 diabetes forced Auerbach to break the rhythm of his pedaling — an interruption he’s anticipated in his daily life since age four. In life’s haste, he must slow down, pull out his glucose meter, and address the task at hand — his health. It’s a routine that’s become part of his identity, and sometimes he appreciates this pause.

Sitting on his bike seat, eating peanut M&Ms with a shaky hand, he was able to gaze into the varied American scenery on the horizon, and breathe for 15 minutes.

“I found a way to take it all in,” said Auerbach. “I could enjoy life without diabetes being a hindrance, but still know that it’s there.”