For student broadcaster, it’s never too early for ambition 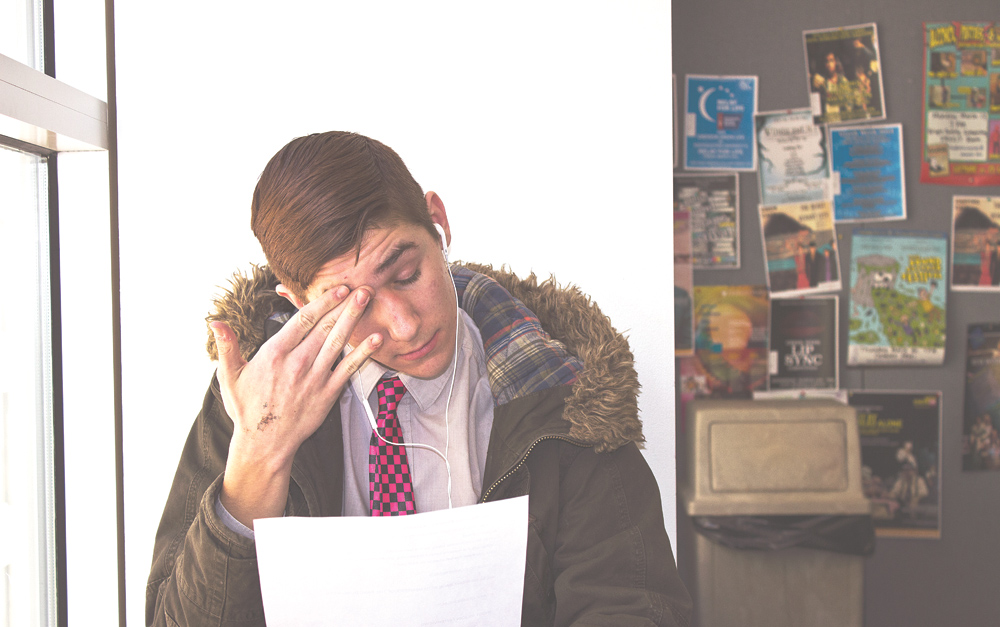 “In terms of how I became entertainment correspondent, well… There’s a story,” said Mudrick, reflecting on the night with a smirk of satisfaction. “I saw our executive producers across the street in a sort of drunk-like stupor, sprinted across traffic to them, and was just like, ‘I have the greatest idea.’”

In an overnight reshuffling of positions, the freshman visual and media arts major became GME’s entertainment correspondent for the remaining 18 episodes of the fall semester and the current spring semester.

The show, which airs Tuesday and Thursday at 9:00 a.m., is modeled after morning shows like Today, but with an Emerson twist. The 30-minute program features news, entertainment, sports, and weather updates along with rotating segments including performances, travel correspondents, and interviews with local professionals. This season, Mudrick balances sass on camera with a critical, professional eye off-camera, exhibiting dedication to both his role as a cast member and also as a critic of himself and the show.

“It had little to do with them telling me I got the position,” said Mudrick. “It was me telling them.”

Gervais, a sophomore broadcast journalism major, remembers the situation as both frustrating and comical.

“At first, I thought, ‘Who is this kid trying to take my job?’” she said. “I didn’t like him because I thought he was planning against me. He planned this whole thing out and ran to our producers and basically said, ‘The news girl isn’t that great and I think you should switch me and Brittany around and I would be awesome in entertainment.’ He really wanted entertainment and he’s not afraid to tell people what he thinks.”

Gervais said she appreciates Mudrick’s open, honest personality, both in terms of a cast relationship and a friendship.

“If he doesn’t like something he will tell you exactly what he’s thinking,” explained Gervais, a former Beacon staff member. “He’s different than most people in that way. It’s cool to have him as a friend because you know he’s not lying.”

She said that Mudrick had once prepared an elaborate answer to recite in a back-and-forth segment between the two of them — but she didn’t get the chance to ask the question that would prompt his meticulous response. Afterward, Mudrick threw his script at her.

“I’m a catty bitch,” said Mudrick. “I’m not, like, handing out notes at the end of the show, but I always look at the negative to see how things could have been done differently and probably better.”

“Christian is very sassy,” she said. “The thing with him is, as his stories continue, you never know whether he’ll praise or be sassy. But he’s always funny. Always.”

His own worst critic

Mudrick’s on-screen time focuses on bashing celebrities — particularly Miley Cyrus and Justin Bieber — but he spends time between shows critiquing his own performances to work toward his goal of eventually hosting GME.

“When watching the show back, I critique myself the hardest,” he said. “Lately I’ve been going through all the episodes and watching myself and thinking, ‘That’s good and cute and funny but if I could do this again, just one more take, I could do this so much better.”

Mudrick looks specifically at delivery and basic personality on camera, he said, locating instances as technically specific as misplaced breaths. This critical side of his personality contrasts the lighter side to which the rest of the cast is exposed, from his morning routine of blaring the empowering music of Beyoncé, to performing what he and Gervais coined “sexy lunges” in the back hallway of Tufte’s eighth floor studio space.

“Before shows, I feel like a butterfly coming out of a cocoon and into the morning,” he said. “I like to think I’ve transcended into HBIC status.”

HBIC status, or “Head Bitch In Charge,” is the standard that Mudrick holds himself to throughout the process of working on GME.

“I like the politics of GME and EmChan as much as I like being on EmChan,” said Mudrick. “I think it’s the social aspect. I like any social drama and change. There’s the technical side that asks who’s responsible, but you also need to ask why it isn’t up to that standard.”

Moving up by speaking up

Though he is only a freshman, Mudrick doesn’t hesitate to offer a constant flow of critique toward Good Morning Emerson. He often compares his semesters working on the show to understand the positive and negative aspects of both. One of the largest changes this semester, he said, is that the show’s talent receives less feedback than they did before, something he sees as creating a relaxed environment but also, at times, too laid back.

“It’s definitely hard to communicate with another person about their delivery, but coming from a high school theater background, I need and want that feedback,” he said. “I take it very seriously and have a lot of pride in my work so I want to do it as well as I can.”

Though Good Morning Emerson is the only show that he is currently involved with on the Emerson Channel, Mudrick said he looks at other shows and judges their productions. He eventually hopes to produce and direct a show himself, he said.

“I just need to jump tracks,” said Mudrick. “I’m more interested in the technical aspect but I don’t feel ready to criticize it yet. I want to be more comfortable first. The hypercritical sensibility will come in handy, though.”

For now, Mudrick is working to develop his on-screen personality by modeling himself after some of his own favorite talk show hosts like Chelsea Handler and Ellen Degeneres, while simultaneously drawing inspiration from fellow cast members. Oprah Winfrey also inspires his television career from a business point of view, he said.

“I don’t really like her personality, but what she has created for herself is something I am constantly in awe of,” he said. “Some may say I’m the perfect combination of Ellen and Oprah.”

Gervais said that with Mudrick’s confidence comes a quality she admires: he takes the liberty to be creative with his scripts.

“There are moments when Christian is reading off the teleprompter, and I’m off stage dying,” she said. “When I first started I didn’t even think to have fun writing my scripts, because I thought I couldn’t be out of the box and I had to be strictly professional. He comes out and makes these borderline jokes though, and it’s nice to see someone push the boundaries a little bit.”

Flippant, confident, and unceasingly driven, Mudrick said he hopes to continue tweaking his skills both on-screen and off to succeed throughout the rest of his time at Emerson as much as he has this first year.

“It’d be cool to be the next Oprah and, you know, own half the world,” he said. “But, for Emerson at least, I’m just continuing on the track that I’m on currently and letting it take me where it wants to take me.”