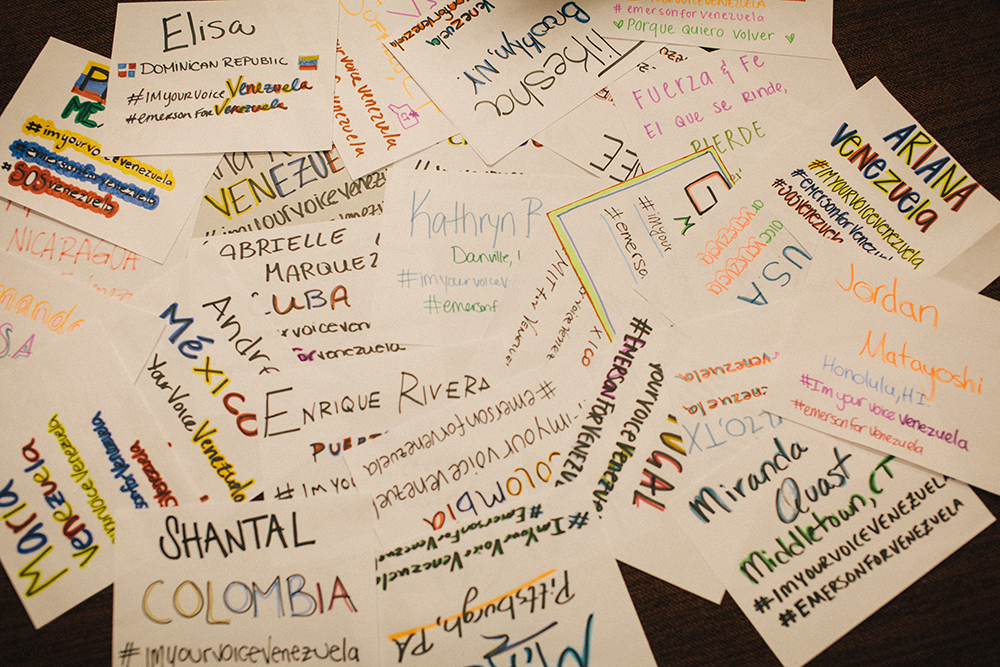 News of confrontations between university-aged students and the militant forces of her country’s government have kept Maria Antonia Dolman on edge.

Images and videos of violent protests in Venezuela have surfaced in her social media streams since Feb. 12, and she’s felt the angst to follow updates — not only to find out what’s happening, but also to figure out if her friends and relatives are OK.

“I haven’t detached myself from social media, which is where I find out about everything,” said Dolman, whose parents still reside in her native Caracas, the capital city of Venezuela. Her dad, said Dolman, works near an area of Caracas where the first protests were held. At the end of that day, three people were killed in the streets of the city Dolman calls home.

By Feb. 25, Reuters had reported at least 13 people have been killed since the beginning of the protests in Venezuela, scores injured, and at least 500 detained.

Dolman said her friends from back home, who are also college students, are unrelenting in protesting despite the violence. She’s proud of their courage and of their determination to defend their beliefs, but she can’t help but long to be there, shoulder to shoulder with the friends she left behind when coming to the US five years ago.

Dolman has been glued to watching videos of police brutality, of shootings, of students protecting themselves against tear gas, of people running, crying.

“I’ve seen the abuse, I’ve seen how the students endure and persist despite the violence,” said Dolman, who moved out of Caracas alone at age 17 with the intention of enrolling in an American higher education institution. “But I also saw photos of military barricades and students talking to them, saying, ‘You are also Venezuelan.’”

The South American country of almost 30 million people has undergone a wave of civilian unrest and instability for more than two weeks. It started when students from universities country-wide were summoned by opposition leaders Maria Corina Machado and Leopoldo Lopez to the streets to protest the violence and insecurity that has been part of Venezuelans’ daily life under the government of President Nicolas Maduro.

Maduro, ruling a country with the biggest oil reserves in the world, is being criticized for high inflation, rampant violence and insecurity, and shortages of basic goods like milk, toilet paper, and toothpaste.

On Feb. 21, Emerson’s Latino cultural group Amigos convened all members of the community to take a photo in front of the yellow, blue, and red Venezuelan flag. Students held a paper in front of them using the hashtags #ImYourVoiceVenezuela and #EmersonForVenezuela.

According to figures from the Office of International Student Affairs, there are 14 students from Venezuela enrolled at Emerson’s graduate and undergraduate programs, but nearly 40 people from American and international cities came to be part of the photo campaign, according to Angelika Romero, historian and member of the executive board of Amigos.

Romero, a junior journalism major and native of Nicaragua, felt the need to raise awareness at Emerson about the state of the people of Venezuela as a gesture of sympathy to her Venezuelan friend Ana Karina Vivas, who is also on Amigos’ executive board.

“The story of oppression that’s happening in Venezuela is one we are too familiar with,” said Romero, referring to the plight some Latin American countries have undergone for generations due to violent and oppressive governments.

Romero said the situation the South American country is experiencing could easily be happening in her Nicaragua or in Mexico.

Ernesto Bustillos, a senior political communication major and treasurer of Amigos, agrees. His and other members’ solidarity stems from an aversion to oppression anywhere.

“This is not about left or right; it’s that there is a dictator bringing people down to the bottom,” he said. “The problem is that there is no democracy.”

Bustillos was born in Mexico, and when injustices happen in his country, he would like to see more sincere and mutual support from American students.

“We are all Boston Strong,” he said.

Romero said that joining in the social media campaign, using both the Emerson and worldwide hashtags, is helping the young people of Venezuela inspire change.

Maduro — the successor of Hugo Chavez, who came into power in 1999 and died of cancer almost year ago — has kept a tight grip on media.

A reluctance by Maduro to import paper for newsprint has forced newspapers with even a century of existence to cut down on pages, and others to suspend circulation entirely. Nearly all radio and TV stations are either controlled or allied with the government of Maduro, who ordered the international news station NTN24, which was broadcasting live coverage of the protests Feb. 12, off the air.

In some parts of the country, the government has succeeded in shutting down internet, blocking Twitter and local websites reporting on the state of unrest.

“It’s a media blockade used by all governments that don’t want the people to know what really is going on,” said Vivas, a junior journalism major who came to Boston at age 17 from Venezuela.

For Vivas, the state of the media in her native country strikes a chord with her eagerness to develop as a communicator. As a secretary of Amigos, Vivas proposed to the other five leaders, who are all from Latin American countries, to create a campaign to bring awareness to the Emerson community on Venezuela’s state of turmoil.

“Here we have a free press, free speech, so we want to use those rights to divulge information on what’s happening,” said Vivas.

So when they open a new photo that comes through WhatsApp, or a video on Facebook, they open them with the knowledge that it could be their friend, or relative, who’s getting hurt. What is certain is that they are all at risk.

Both Vivas and Dolman, who feel fortunate to have the opportunity to study abroad, said the anguish of being away is not a feeling easily dealt with.

“It’s hard. ... These past few days I’ve had a feeling of guilt because I’m safe here,” said Vivas. “But my friends and family are not. It’s my friends who have been jailed — and I think like them. It’s them who are being violated, tortured for expressing their view, and here I can say what I want without feeling fear.”

The hardest part of being away is the feeling of not being a participant, of not being there next to her friends to support them, said Dolman.

This feeling of heartache and of lacking the proximity necessary to contribute something to their home country is not a new one to those who live away.

Currently, there are 334 international students enrolled at Emerson, according to figures from the Office of International Student Affairs. That’s 334 hearts that skip a beat when a call, a text, or a message on social media comes in from home with bad news.

For this reason, Vivas explains, little acts of solidarity — like participating in a photo campaign or showing interest in what’s going on — can go a long way.