In the fitness center, Emerson-style bros: A broader base of applicants makes way for diverse gym-goers 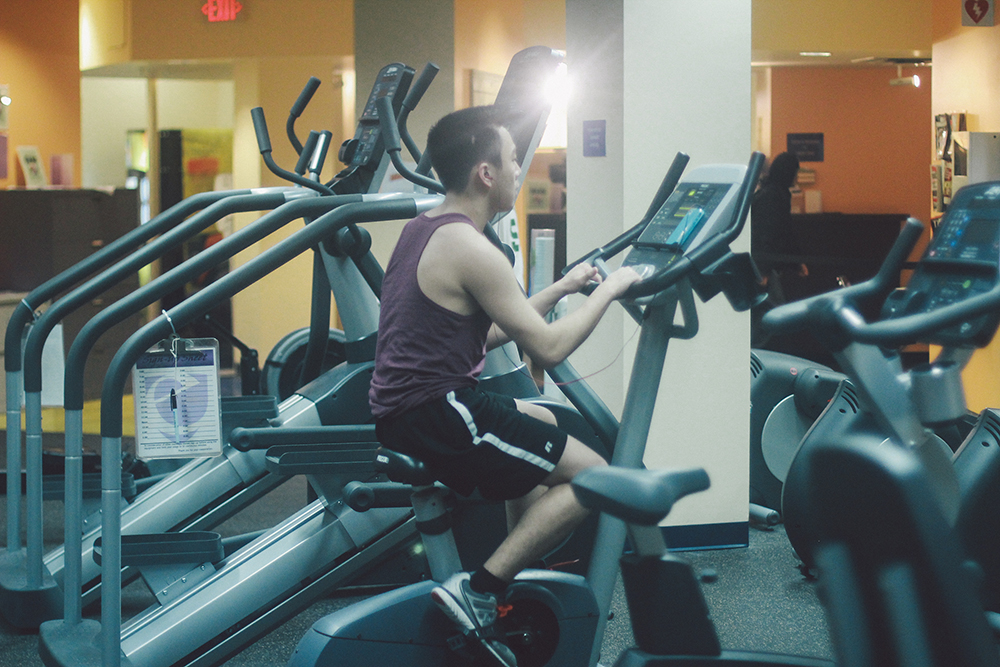 During the 2007-2008 school year, Emerson started using the Common Application, making it easier for a broader swath of students to vie for admission. In 2010, the college added housing for 260 students by establishing the Paramount Center Residence Hall. The 4,584 applications submitted for the 2004-2005 year jumped to 7,433 applications by 2010-2011. Emerson students have noticed a fresh social group on campus, possibly brought on by the expanding demographic of applicants and eventual students.

The school’s historically offbeat, stereotypically hipster population has been met with a counterculture of “bros” and “gym rats,” who have an obvious place to congregate on campus. The Fitness Center sees many students, often athletes, who spend numerous hours a week in the basement of the Little Building, where they can witness the diverse crowd while working on their fitness.

As a member of the volleyball team, senior journalism student Tom Carroll is required to lift two or three times a week at the Fitness Center, but said he is sometimes there more than required to work with the athletic trainers.

“I used to go to Assumption College out in Worcester, Massachusetts, and there’s legit bros there; there’s a lot of bros out there,” Carroll said about the school, which has over 20 Division 2 athletic teams. “So when I’m at Emerson, there’s just like nothing that can compare to the bros at other schools. So, a bro at Emerson is like nothing compared to the bros that are out there.”

“I’d say myself, I’m a gym rat, because I came from a group of friends who we were all gym rats, so sports or not I would still be going to the gym,” said the visual and media arts major.

His teammate, freshman marketing communications major Clint Fontanella said, “There’s bros at every college, but at Emerson we have that like Emerson twist. We’re not traditional bros.”

Both freshmen applied to Emerson through the Common Application.

“I like that Emerson is getting more kids that are interested in athletics to come here. It makes for a more diverse student population,” said Carroll.

Ronald Smithers Jr. spends about 40 hours a week at the Emerson Fitness Center as the general manager. He assisted in an update to the Center this summer, adding more popular equipment like treadmills and ellipticals to the facility. According to Smithers, some of the equipment had not been updated in 10 or 15 years.

“We see such a diverse population here, so I mean what people do is very individualized, it’s not really based on ‘groups,’” he said.

Amber Layne transferred to Emerson after one year at University of Florida, where she says people would go to the gym everyday and wear workout clothes constantly. The junior, who studies marketing communications, said she attends the Fitness Center two or three times a week, and there is an obviously smaller number of students, and therefore a smaller facility.

“It makes sense; people at Emerson are more into their arts. At Florida it was all about looks,” she said.

“A student is a student, my perspective and everyone who works here at the fitness center, we’re just here to cater to all the students, regardless of their social circles they are in,” Dunbar said.

Concerning the social demographics on campus: “To be fully honest, I don’t even know what a hipster is,” he said.