For smokers, a Common spot revoked 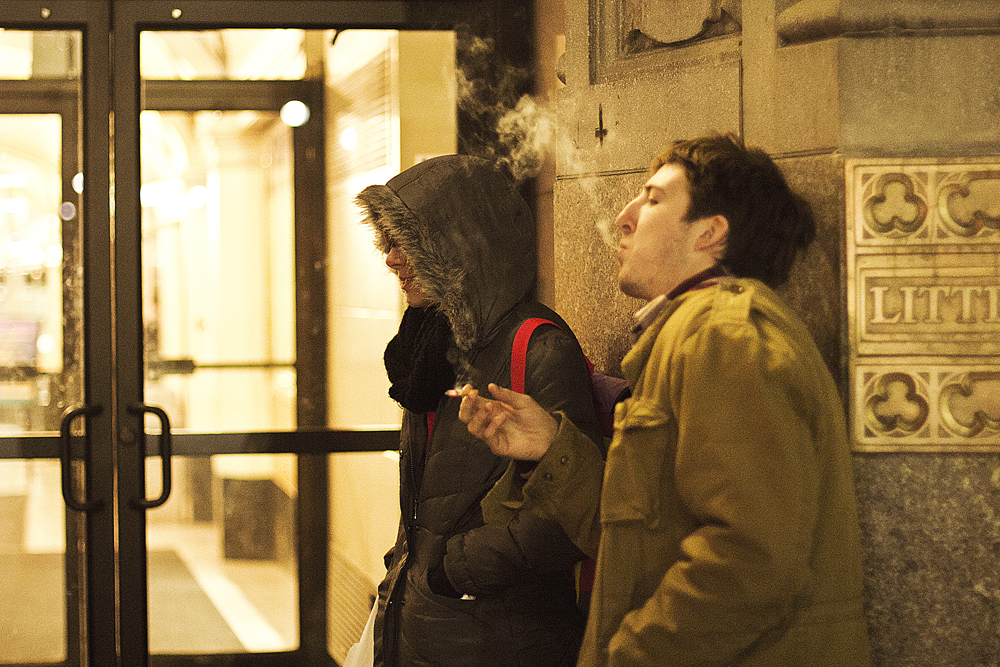 Robertson Kolby Woodfield was walking through Boston Common smoking his daily cigarette when a passerby gave him some unexpected news: he was breaking the law.

An expansion of the regulations that Mayor Thomas M. Menino proposed during his administration, the new ban has been in effect since the start of the new year. It prohibits the use of cigarettes, marijuana, e-cigarettes, and vaporizers in all of the city’s 251 parks, cemeteries, and other open spaces. Of course, this includes Boston Common, whose proximity to campus makes a go-to spot for many Emerson smokers. The ban may push students looking to get their nicotine fix in the park’s open spaces to the already-cramped sidewalks of campus.

“I didn’t put it out,” Woodfield, a senior visual and media arts major, said of his reponse to the stranger’s remark. “It will be very difficult to enforce it with the number of people that smoke in the Common. I feel like that’s where everyone goes to smoke, especially Emerson students. I think that they’ll keep doing what they’re doing.”

Both Boston Police officers and park rangers are able to issue $250 fines for violators, but Nick Martin, the director of communications for the Boston Public Health Commission, emphasized that initial enforcement will be on a peer-to-peer basis, encouraging park goers to remind smokers of the rules, with police involvement as a last resort.

“We want people to be comfortable asking others to put out their cigarette,” Martin said. “If it becomes a problem, then the police can step in and assist.”

Danielle Barker, a junior writing, literature, and publishing major, found the peer-to-peer aspect of the initiative to be problematic.

“Now they’re making it a citizen’s duty to enforce it,” said Barker, who regularly smoked cigarettes in the Common. “The only people who will do that are the people who really care and are affected by smoke, so it seems pretty loose to me.”

“I don’t think people know about it that much, and I know that I just pretend that I don’t know about,” said Stantcheva, who smokes about four Marlboro Reds a day. “There are no signs about it yet, no advertising, so I feel like if I get caught, I can just say I didn’t know about the rule.”

Emerson students aren’t the first ones to make Boston Common a hub for smokers. According to an article in the Boston Globe, Boston’s relationship with smoking dates back to the 17th century, when the colony’s Puritan founders effectively banned the use of tobacco throughout the city. But in the mid-19th century, the mayor established a Smoker’s Circle in the southwest end of the Common, making it the only public place in the city where smoking was allowed at the time.  In 1880, the ban was lifted.

Conversely, Boston also has a history of pioneering anti-smoking laws. Martin said that Boston was one of the first major cities to ban smoking in restaurants in the early 2000s.

In 2011, the Boston Public Health Commission worked with the Parks and Recreation department and groups of concerned parents to prohibit smoking in children’s playgrounds. Martin said there was no enforcement mechanism behind the ban, but the awareness campaign that included posting flyers and signs in the area was effective in itself, helping to cut down litter in the playgrounds. To further encourage healthy lifestyles, the Parks and Recreation department is also in the process of installing outdoor exercise equipment in various outdoor spaces throughout Boston, said Jacque Goddard, director of external affairs for Boston Parks and Recreation.

“Parents and park-goers were very happy with the smoking ban,” Martin said. He added that the Public Health Commission plans to apply the same awareness campaign strategies to the new ban, and are in the process of designing new signage to be displayed throughout the parks, plus flyers that will be handed out to nearby restaurants and hotels.

Both Martin and Goddard said they didn’t expect much backlash from the new regulation.

“People will be really receptive to it,” Martin said. “If the experience with the children’s playground is any indication, I don’t see any issues with enforcement.”

The rate of Boston smokers is relatively low — only about 14 percent of Bostonians smoke cigarettes, according to a study by the Centers for Disease Control and Prevention. But on the cramped sidewalks of Emerson’s campus, the concentration of smokers often seems high. At any given moment, it’s likely to find a student huddling under the archways of the Little Building or the overhang of the LEED-certified Piano Row, puffing out billows of smoke despite rules that prohibit these behaviors during certain hours.

Additionally, Emerson cigarette smokers have not experienced limitations regarding their outdoor smoking habits. Andrew Tiedemann,  vice president of communication and marketing, said that because the sidewalks belong to the city of Boston rather than to the Emerson campus, ECPD does not enforce smoking policie there.

Goddard said the only criticism of the smoking ban she was aware of was in the form of a small rally of about 12 people who congregated Saturday, Jan. 25 with signs and posters near the Sailors and Soldiers Monument on the Common. After about a half hour, the protestors dispersed peacefully, providing no reason for the police to interfere.

Goddard said that although the smoking ban was in the works before medicinal marijuana was legalized in Massachusetts, marijuana was another, albeit minor, reason why the Boston Parks Commission adopted the rule.

For an Emerson student who wishes to remain anonymous, the rule isn’t a definitive way to decrease his consumption of marijuana, but a reminder to smoke more discreetly than before.

“Last year, my friends and I would hit the bong out in the Common almost every day, but now I’ll probably stick to papers and try not to be as obvious about it,” the student said.

While living in the Little Building last year, the visual and media arts major said he and his former roommate received a written violation for possession of marijuana paraphernalia.

“If that had happened this year, I would’ve been really frustrated and taken the chances of smoking outside in the Common,” the student said. “If I get in trouble in the dorms again, they would kick me off campus, and it’s not worth the risk.”

The ban raises other issues regarding marijuana, such as how the Freedom Rally pro-pot protest will continue. The annual event, also known as Hempfest, has taken place on the Common on the first Saturday of September since 1989. Hosted by the National Organization for the Reform of Marijuana Laws, the Freedom Rally provides a medium for marijuana enthusiasts to mingle, protest anti-marijuana laws, and shop for marijuana-related products and paraphernalia. Bill Downing of NORML said in an interview with Boston Metro that the recent ban would not interfere with this year’s Freedom Rally.

“At Hempfest, everyone was smoking, so I’m curious to see what will happen with that,” the anonymous student smoker said. “[Boston] seemed pretty progressive in terms of decriminalized and medical marijuana, so it seems surprising that they’re increasing bans. I feel that’s an unprogressive thing to do; it’s limiting a freedom.”