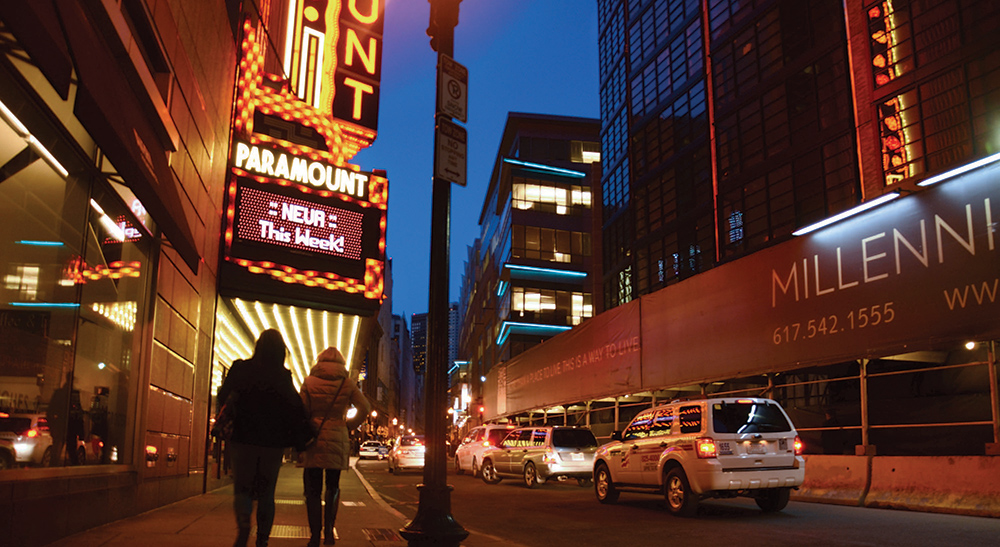 Students bustling in and out of the Paramount Center have seen a massive project looming above them: the 15-story Millenium Place, to be filled with 256 luxury residencies, ranging in price from $550,000 to $3.35 million, according to its website. Half of these units have already been sold.

The building is part of a push to turn Downtown Crossing, the Washington Street corridor, and the surrounding areas into a livable, active neighborhood. And after years of problems, the effort seems to be progressing: According to the Boston Globe, the Millenium Partners, the group behind Millenium Place, also has plans for a 600-foot tall residential tower on the Filene’s block. Another group’s development plans faltered on that lot in 2008.

Last Tuesday, real estate development association NAIOP Massachusetts held a panel discussion in the college’s Paramount Center to talk about the growth of Downtown Crossing. Emerson President M. Lee Pelton, who was on the panel, touted the college’s influence on the area, according to Emerson’s website.

Peggy Ings, associate vice president of government and community relations at Emerson, said that efforts like running theaters and bringing student activity to the area have spurred the openings of restaurants, hotels, and other businesses.

“I think we paved the way for the projects that have come after us,” said Ings. “Paramount is completed, and then you see a building going up. I’m not sure the college can take credit for all of it, but it can take credit for the immediate environs.”

Downtown Boston’s reinvigoration has been a long time coming, and Emerson has expanded with it.

The college’s first purchase on the east side of the Common was the Cutler Majestic Theatre in 1983, when the school was still primarily located in Back Bay and centered around Berkeley and Beacon streets (hence this newspaper’s name). After an abandoned plan to relocate to Lawrence, Mass. in the 1980s, the college began purchasing more properties in the Theater District — first, the Ansin building in 1992. The Little Building followed in 1994.

At the time, the area still had connotations as the “Combat Zone” — the region of Boston zoned for adult entertainment.

“I never felt unsafe before the full transition, gentrification if you want to call it that,” said Flora Gonzalez, a writing, literature, and publishing professor, “but I know that students who were living in the Little Building had to be a little careful going to the 7-Eleven to shop for something late at night ... It was a funky part of town, if you want to call it that.”

Robert Fleming, the college’s library director and, at the time of the purchases, its official archivist, said that the neighborhood had gotten safer but still had a bad reputation.

“I think some students and some parents had a concern about the college opening a residence hall close to the Combat Zone,” said Fleming. “My thoughts were framed somewhat in the context of the potential move to Lawrence. [Moving downtown] seemed like a much better idea.”

Dave Mehr, who graduated Emerson in 1994 with a Master of Arts in Communication Industries Management, said he was

surprised when the college began buying properties across the Common. Growing up in Maine, Mehr said he had heard about the Combat Zone and its associations.

“I thought it was a bold move to do and a real gamble,” said Mehr. “There were never any robberies at 100 Beacon, at all,” he said, referring to the address of his dorm building. He said that he didn’t get a sense that fellow students resisted the move. However, he said they did lament leaving “the Wall,” a structure on Beacon where students would congregate and post fliers.

Soon after the first purchases, property values began to rise in the area. The college purchased the Little Building for $5 million in 1994, according to the Boston Globe. When Emerson bought the Walker Building on the same street five years later, it paid $22.75 million. In addition, Ings said task forces would litigate adult clubs that would attempt to move or expand.

Fleming said, for him, the opening of the Loews Boston Common in 2001 was a tangible sign of change.

“There was a boarded-up movie theater where AMC Loews is,” he said. “To see a big, new multiplex was real symbol of revitalization.”

With an influx of residents to the Millenium Partners’ projects, there may be a risk of echoing a problem that occurred in Back Bay, where Fleming noted there had been tension between residents and students. But he and Ings both said they thought the situation here is different.

“In the instance of moving to this location, we were here first,” said Ings. She said that anyone moving here is likely attracted to the vitality that a student presence brings, and that current residents have told her they appreciate the activity.

“Of course, when students come back from breaks, [residents] say, ‘Why are they smoking on the sidewalk?’ ” Ings said.

Mehr, who now works as a consultant for non-profit organizations, said he thinks the move has benefitted Emerson and the neighborhood. Since his time at the college, he has noticed a rise in the school’s profile.

“Emerson seems to be more and more on the tongues of kids not just from Boston, New England, and Long Island,” he said. “It’s a lot better to be in the middle of things than being tucked in an alley.”

However, it can be a little strange when he visits.