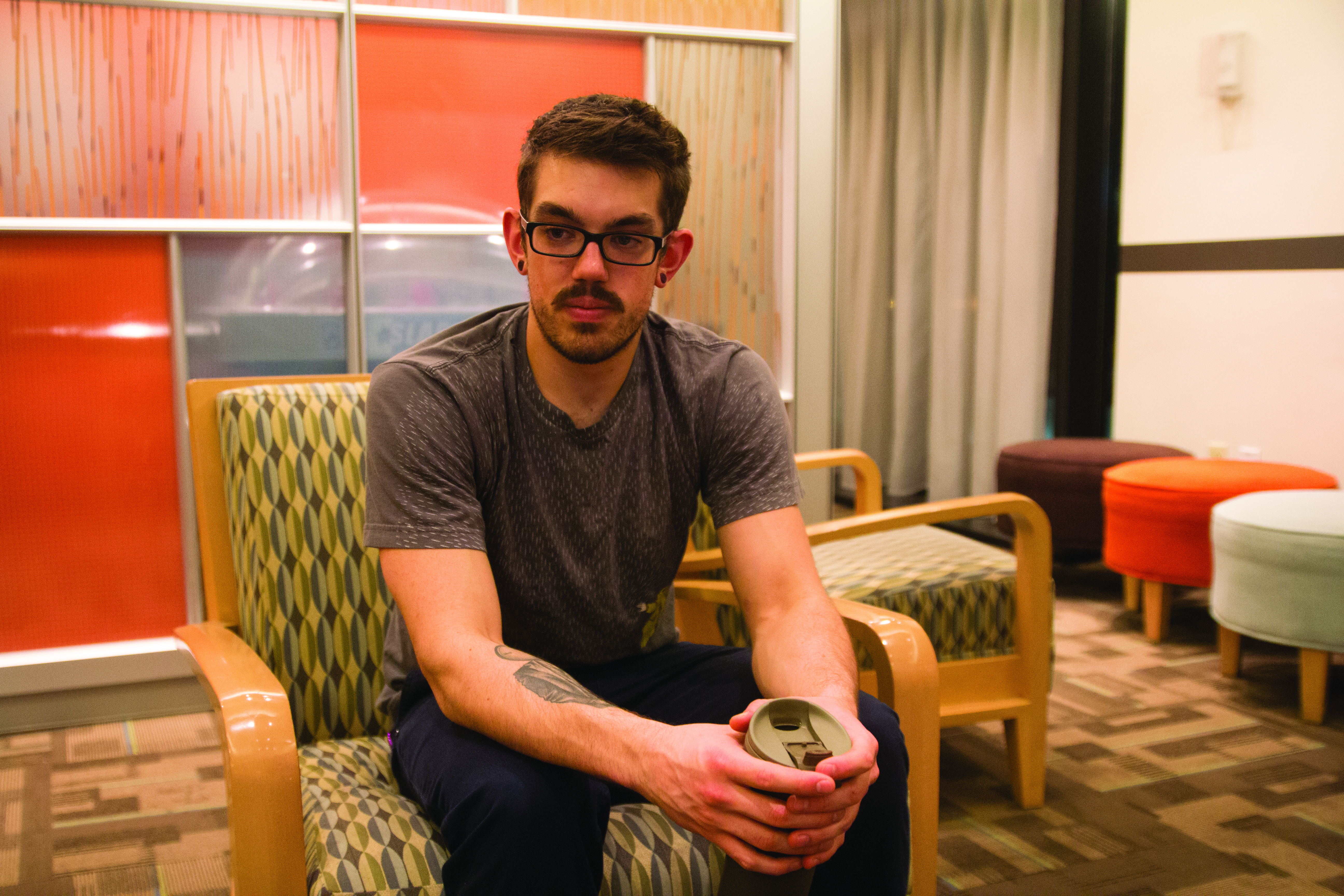 Both of the Undergraduate Students for Publishing’s book releases this semester blend childhood experiences with a distinctly grown-up worldviews.

CJ Nadeau’s novella The Mousetrap Rose creates a drug-flattened dystopian landscape, then splashes it with playfully surrealist imagery that the author has carried from his youth. Meanwhile, Donnie Welch’s poetry collection Who Gave These Flamingoes Those Tuxedos? peppers neuroses into Seussian verse.

Undergraduate Students for Publishing will launch the books, which were chosen from 11 submissions and will be published on the club’s imprint Wilde Press, on April 26 at 7 p.m. in the Bill Bordy Auditorium and Theater. The books each cost $8, with the proceeds going to a charity of the author’s choice—Welch chose the Boys & Girls Clubs of America, and Nadeau chose charter school organization the Knowledge is Power Program, according to Liza Cortright, a junior writing, literature, and publishing major and the club’s co-president.

The two authors, who are friends and fellow writing, literature, and publishing majors, will be at the launch to read from and sign their books.

CJ Nadeau said he remembers seeing faces in objects. As a kid, he said he doodled a clock as the head on a human body. Years later, the image became a tattoo on his right forearm. And next week, that anthropomorphic timepiece becomes a character in Nadeau’s novella The Mousetrap Rose.

A dystopian work that harkens to Aldous Huxley’s Brave New World, the book follows the young man Tom as he faces the oppressive and rigid practices of the world he lives in: Children are collectively raised in Community Centers, where their emotions are stifled by drugs and their lives determined by rigid career paths, while adults have their memories removed.

After a missed love opens his eyes, Tom finds himself aiding a revolution led by a drinking buddy, who plans to counteract the society’s plans with drugs of his own: stimulants that make the user feel a rush of the emotion of their choosing. Soon, they are joined by the mysterious clock-headed figure, who goes by the name Colonel Belafonte and talks through a salmon in his suit’s breast pocket. Belafonte has plans of his own for the revolution and manages to be persuasive and seductive.

Nadeau said that he wants the surreal and sometimes bizarre imagery to exist for its own sake.

“Images in my writing, they’re just images I’m infatuated with,” he said. “I don’t really assign meaning to them.”

The book, though written in third person, spends much of its time in Tom’s head and body – vividly describing point by point what he sees and feels. In one of his early encounters with a precocious girl named in the Center named Cat, Nadeau describes their awkward dance: “Cat takes Tom by the hands, pulls him in a circle, lifts his arms, and dances until his arms are sleeping, tingling, and filled with needles. They dance until they are so tired that blinking becomes a hassle.”

Nadeau said the story first came to him after he heard of technology that could allegedly dissociate a person’s memory of a traumatic event from the accompanying negative emotion. From that idea, the rest of the story came as he wrote.

“I always have a loose idea of what I want to have happen. I let it develop as I write,” said Nadeau, a senior.

He began writing The Mousetrap Rose last July, and had submitted an early draft of the story to Undergraduate Students for Publishing last semester. It was rejected, but two Pub Club editors, Ellen Duffer and Gabby Balza, took an interest in the manuscript and edited it with him over the next few months.

Through those first several drafts, Nadeau took efforts to distinguish his work from Brave New World and the film Eternal Sunshine of the Spotless Mind, another reference point that people would often bring up (though Nadeau said he has never seen it).

Despite working in a genre that has often been used to critique society or government, Nadeau said he is not trying to make a statement. Even the prevalence of drugs in the book—as conduits of both oppression and freedom—comes from a place of curiosity rather than judgment.

“I’m intrigued by how different drugs affect people, but it’s just observation,” he says. “I didn’t have an agenda in writing this.”

Rather, Nadeau just wants to put to paper the thoughts and ideas that intrigue him—something that he often credits to stories he hears from the people around him. Or, as he puts it: “I’m really thankful I have interesting friends that do more things than I do.”

Donnie Welch wants you to be yourself, and he says so right away.

His new collection of 37 children’s poems, Who Gave These Flamingoes Those Tuxedos?, invites the reader into a world of whimsy and wordplay, on one condition: “So I’m giving you my what’sitmacalled in one easy installation./ And the only payment I ask is that you never lose your imagination,” he writes in the first poem, “The What’sitmacalled.”

It’s a message that Welch said he hopes is reflected by the work itself.

“It’s nice to show that people can still write whatever they like. People are caught up in an idea or conception of what literature is,” said Welch, who will graduate in December. “At Emerson we’re focused on how we take our passion and make it guide us through life. I hope it shows that that’s possible, that you don’t have to fit into a check box.”

Trying out children’s poetry allowed Welch to practice being more himself, too. He said the format lets him explore certain feelings that can be off limits for adults.

“If you just don’t want to do anything when you’re an adult, it’s due to laziness,” he said. “When you’re a child, if you don’t really want to see people, you can just have those days without the title or excuses.”

Welch’s speakers often find themselves bewildered by the world – In “Cheesecake,” he’s disgusted by the thought of eating a cake made out of cheese; In “The Flew,” he wonders why someone would complain about an illness that allowed them to fly. The pieces stay playful and light — full of zoo animals and made-up words — but reveal some anxiety in miscommunication.

“I’d like to write stuff that can be reached by all ages, but doesn’t alienate children,” he said. “I would like ideally someone who’s younger to understand the message, but for the adults, all the allusions will be apparent to them.”

To achieve this, he has to think from both points of view.

“I would think of the mindset of a child in certain situations, how it would be perceived by someone who’s seven or eight, then also how I would perceive it, and I’d show the contrast,” he said.

For Welch, children’s poetry was in part a way to have more fun with his work – but he also didn’t want to stray too far away from rules of serious poetry.

“I reread [famous children’s poet Shel] Silverstein, but I also read a lot of Robert Frost, to keep form and meter in mind,” he said. “The poems have these whimsical thoughts, but the structure gives them a spine.”