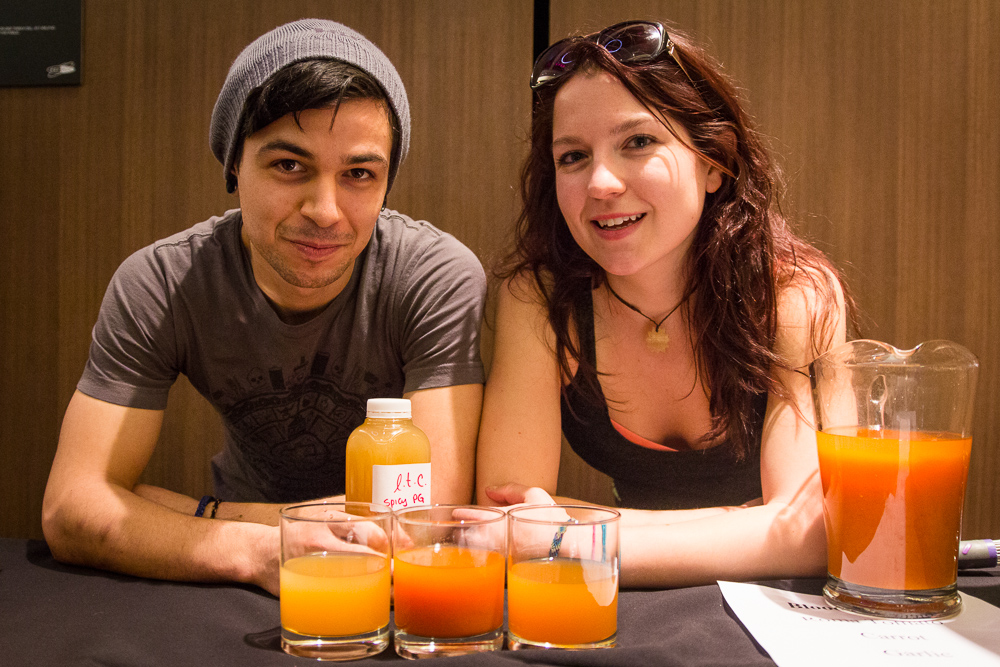 When Melina DiPaola was 5 years old, she found out she had a brain tumor. She said she underwent nine tumor-related surgeries, six of them within the first year after her diagnosis. But to supplement the harsh treatments, DiPaola travelled with her parents to San Francisco from their home in Hadley, Mass. four times a year to receive acupuncture, laser treatments, and adjustments to her diet. When some of her tumor went away without being surgically removed, she and her parents attributed the success to her healthy lifestyle.

DiPaola, a former writing, literature, and publishing major who graduated last May, said she carried her concern for her well-being throughout her adolescence and into early adulthood, and decided she wanted to pursue health-consciousness as a career. So she bought a juice press, and e.t.c. juicery came into fruition. DiPaola and Cofounder Robert Preciado operate out of a kitchen in the North End and sell fresh pressed juices made-to-order from their website.

“Basically, it’s the human body equivalent of plant photosynthesis,” she said. “It’s also cool if you think about it—you’re drinking the juices, they’re going into your cells, and it’s being converted into usable energy.”

“Juice mixmaster” Preciado, a former culinary student at Le Cordon Bleu who has worked in and out of kitchens since the age of five, was on board from the moment DiPaola proposed the idea. The two, who are now dating, met through DiPaola’s father, who runs a restaurant that Preciado formerly worked at. Preciado said he enjoys making their customers feel good about what they’re consuming. He also just likes mixing the flavors — he said it’s almost a form of chemistry.

“I like that people aren’t drinking shitty stuff, like soda and fake juices,” he said. “There’s a lot of unnatural stuff that goes into bottles and it makes me feel uneasy. I would rather create something from scratch and have other people enjoy what we’re doing.”

“We found that gold beets—raw—numb your mouth, very intensely,” he said. “Our mouths were numb. It was then that we decided not to do gold beets anymore.”

But Preciado said that coming up with new flavors relies heavily on winging it, and involves a lot of experimentation. One recipe that Preciado said they have improved over time is their cashew milk — they had to find the right balance between cashews, sweeteners, and vanilla to make it taste like fluffy marshmallows. DiPaola said that health nuts love their green juice, while other customers favor their spiced apple and spicy pineapple grapefruit juices.

Once the pair had a basis of recipes worked out, DiPaola said they began selling their juices to friends in the North End about a year ago. In September, business started to pick up, which DiPaola credits to word-of-mouth. They expanded from juicing for order to juicing for small retail businesses, such as B-tone Fitness on Newbury Street.

But getting to this point was not simple.

“With any startup business, you have to put in the time at the beginning,” DiPaola said. “There are rewarding moments, but it’s such work at the beginning that you have to suck it up. You want to hire people that can do it for you and you want to do all this stuff, but for profitable reasons and to get enough capital in your business account, you have to just basically do everything yourself.”

DiPaola and Preciado typically work on e.t.c. orders on Sunday, Tuesday, and Thursday. The day starts with washing and cleaning all of the fresh produce and preparing and labeling all of the bottles. Then, depending on the volume of an order, the pair can spend anywhere from four to eight hours on juicing alone, placing the fruit in a machine that grinds the fruit into a paste. It then goes into a bag to be pressed, bottled, and immediately refrigerated.

Thea Valvanis, an e.t.c. customer, said she heard of the brand through her daughter. Valvanis said she has done e.t.c.’s juice cleanse five or six times, which involves drinking only juice for an allotted period of time, and said she found the juices delicious and felt clean and healthy after each cleanse.

“I think it’s a great thing for everyone to try,” Valvanis said. “If you do it, you just walk away thinking, ‘Wow.’ It’s a test for yourself, and the results are so positive that it’s really worth the challenge.”

Valvanis said she is a fan of e.t.c. because of the way DiPaola and Preciado approach running their business.

“I like the fact that Melina and Robert are young and they’re energetic and enthusiastic and really positive,” she said. “They work with you; they accommodate the customers.”

DiPaola said one of her favorite aspects of running the business is the personal interaction with customers, from filling online orders and answering email questions customers have about cleanses or various juices. She said she most appreciates talking to clients who have family members with cancer, because she can with her own experience and advice.

Though there is no class at Emerson that teaches a student to run a juicery, the former writing, literature and publishing major said that being able to write well always helps, and her marketing minor enabled her to be her own public relations representative.

“Being able to communicate, written and orally, in a way that other business professionals can see that I really know what I’m talking about — that definitely helps,” she said.

And, as she focused on poetry, the eccentricities of Emerson allowed her to keep her imagination vivid.

“It allowed me to keep that creative part of my mind going, which is my true side, in the midst of having to deal with all of these factual business matters,” she said.

Looking forward, DiPaola and Preciado are searching for the perfect storefront, with the right location and the right rent. They also plan on continuing to be involved with various events around town, including an upcoming annual Yoga Reaches Out event, which is funding Boston Children’s Hospital and Children’s Tumor Foundation this year. Because DiPaola’s surgeries took place at Boston Children’s Hospital, and because she loves yoga and all things fitness, e.t.c. putting together a team to raise money for these charities is particularly special for her.

“It’s probably the most full-circle thing I’ve ever felt, so far,” DiPaola said. “In the future, I’d ideally want to make fresh-pressed juices accessible to these kids. They’re so healing and concentrated with nutrients. That’d really be full-circle.”