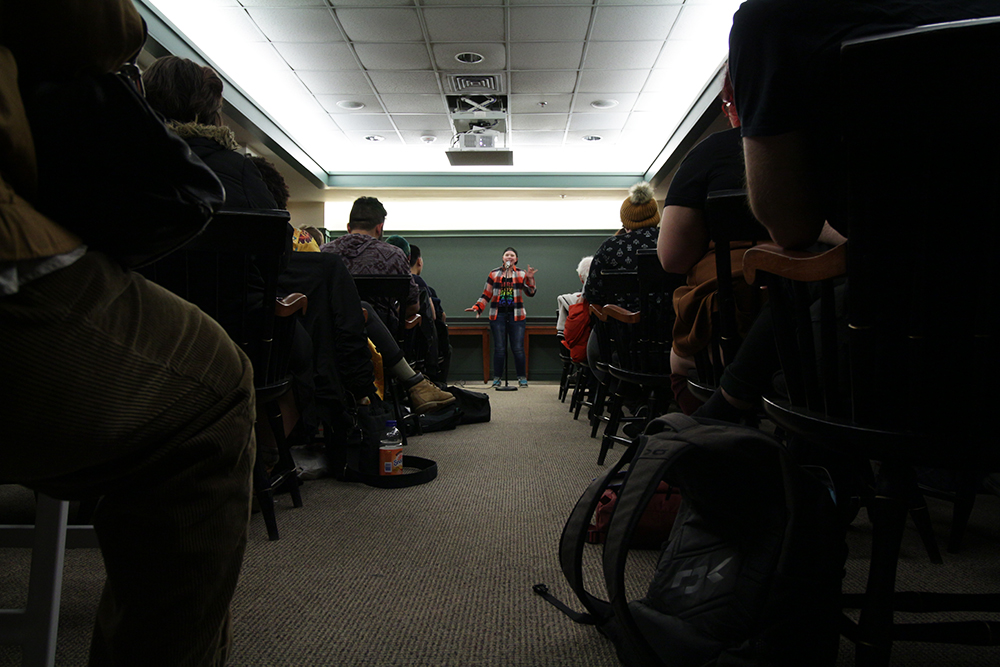 The Emerson Poetry Project’s first ever regional poetry slam served as a testing ground for students’ pieces before attending a national event in April.

Three judges, randomly selected from the audience, picked winners for each round by rating each poem from zero to 10. Emerson students won three of the four rounds, and received the highest overall score.

About 15 audience members showed up to the event in the Little Building’s Beard Room. Al Reitzel, a senior writing, literature, and publishing major and EPP co-president, said Emerson held the event because EPP had an opening in their schedule. Reitzel said they have been held at Berklee in the past.

“We thought that this was a really great opportunity to foster the community of poets within our city and bring new voices to Emerson,” Reitzel said.

Reitzel said the open event was for students to practice before EPP sends a team to the College Unions Poetry Slam Invitational (CUPSI) in Chicago in April.

Em Taylor, a sophomore writing, literature, and publishing major, said their poem, “Paper Doll,” is about the way sex education has failed people. Their poem tells the story of someone who grows up in a society where they are taught that only men enjoy sex.

“What we try to do here at Emerson is to create the most important poems,” Taylor said.

Evan Cutts, a senior writing, literature and publishing major, said his poem, “The Punchline,” is inspired by having heard his friend use the n-word. Cutts said the poem is about the erasure of the African-American community and losing trust in a friend.

“Shame be a diligent bloodhound. / It found me / twice, in my poplar bed frame / feigning sleep / pretending silence / isn’t also erasure—isn't too far removed from / the lynch mob & its chant for smoking flesh,” Cutts read.

Alex McDonald, a freshman writing, literature, and publishing major, started off the night as the sacrificial poet, meaning the judges used his score as reference when judging the competing poets. He said his poem, “Roar,” is about his relationship with his stepfather.

Laura Cafasso, a junior writing, literature, and publishing major was selected to judge the poets. She said she scored the pieces based on writing, performance, and emotion.

Cafasso said she appreciated the opportunity to hear poets from other schools. She said she enjoys going to EPP events, which she said creates a free and happy spaces for students to express creativity.

“It’s one of the best organizations on campus, and it’s a great community. It’s where I found most of my friends,” he said.