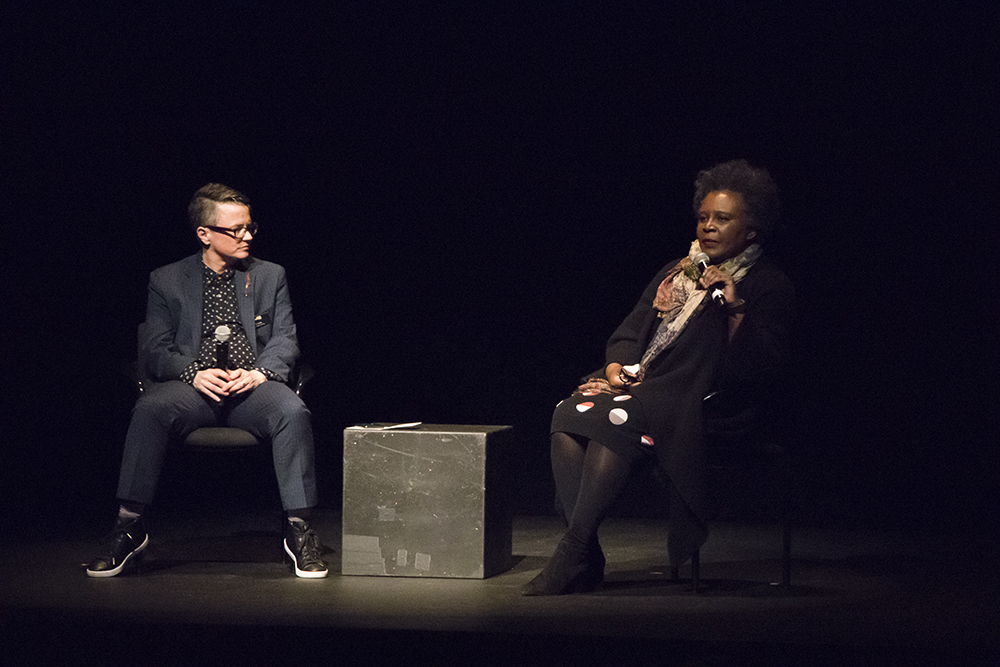 All eyes were on Claudia Rankine last Friday when she spoke in the Cutler Majestic Theater about the importance of white people acknowledging their racism and the ability art has to move the conversation forward.

The award-winning poet and playwright gave her presentation, titled “On Whiteness.” Nearly all the seats were filled at the public ArtsEmerson event.

Mayor Marty Walsh introduced Rankine at the event. He said that Rankine’s discussion about race comes at a time when many citizens across the nation and in Boston are rethinking how to address racial issues.

“Racial injustices [have] happened to our city, [have] happened in our city,” Walsh said. “Change needs to start now with our words and our interactions every single day. The conversation [about race] drives change more than we’re aware.”

During her speech, Rankine discussed the myth that the current oppression of people of color is a contemporary phenomenon.

“It’s not new. I think that we as American citizens have to be vigilant in ways that we should’ve been vigilant before,” Rankine said.

Emily Carroll, a freshman performing arts major who attended the event, said she thought Rankine’s speech was wonderful and powerful.

“After the election, I personally was worried that people would kind of move on and be a little bit defeated just because of everything that went on,” Carroll said. “And I was glad that at this event, she was talking about how we’re going to move forward and keep hope and keep trying to change people’s minds.”

Carroll said it was difficult to pinpoint a favorite part but said she enjoyed the visual aspect of the presentation. Carroll said she particularly appreciated the photographs and quotations that accompanied Rankine's speech.

The presentation added to the ongoing discussion on race at Emerson. Members of the Emerson community received emails from the White Genocide Project two weeks ago, prompting a response from President Pelton. Last Wednesday, students delved deeper into racial conversations at an open discussion heldby the Office of Intercultural Student Affairs.

Rankine is working on developing an original play with ArtsEmerson for the next semester that will discuss similar topics, according to P. Carl, the co-artistic director.

Carl said ArtsEmerson considered the discussion a success, with about 950 people in attendance. He said race relations are very tense in Boston right now, and Emerson should try to offer education on issues whenever possible.

Mayor Walsh argued that Rankine’s status as a National Endowment for the Arts recipient highlights the need for the program.

The NEA is a government program that provides grants to artists and art programs. The Trump administration has threatened to cut it from the budget.

“We are going to fight for the NEA,” Mayor Walsh said.

Though Rankine did not read any of her creative work at the presentation, Walsh noted how her renown as a poet helped promote this dialogue on race.

Rankine will return to Emerson as she reveals her new racially-themed play with ArtsEmerson in the 2017-2018 season.

At the end of the presentation, Rankine offered her advice on how conversations between people of color and white people should proceed.

“It begins the discussion after the moment you say white people are racist. And not be defensive around that,” Rankine said. “Everything in the culture has worked over time to allow white people to feel that dominance. And no individual in these United States could have avoided it. No matter what their intentions were, there was no stepping outside of a culture.”

Carroll said Rankine’s presentation struck a hopeful note. Carroll said she feels as if bigotry has become more commonplace and accepted with Donald Trump as president.