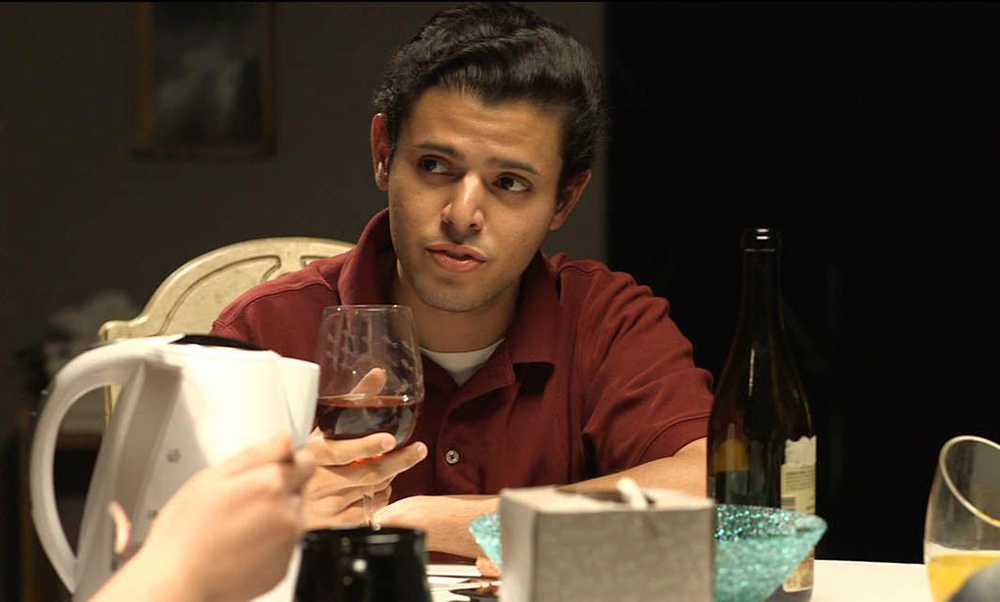 A man in a bear suit falling in love, a clown coming out of retirement, and an assault survivor preparing to box—were just a few shorts featured at the 17th Annual Emerson College Film Festival on Saturday in the Bright Lights Screening Room.

The festival featured 14 films, three of which were picked for awards. The audience award was sponsored by alumni, according to Director of Programming Anna Feder. The Barbara Rutberg Documentary Award was decided by Emerson alumni Rutberg, and the Film Nation Narrative Award was picked by staff, said Feder. About 75 people attended the first program, and about 120 attended the second.

“This is one of the most eclectic mixes of work from any festival I’ve been involved in,” Feder said. The festival included a broad range of films featuring a variety of narratives, a documentary about the Tiananmen Square massacre, and a stop-motion animation.

Around 80 films were submitted for the festival, Feder said. Faculty viewed the submissions and made recommendations to Feder and visual and media arts assistant professor Sarah Zaidan, who decided which films to feature.

The festival gives students experience creating films, Feder said. She also hopes students attending the screening will be able to see what a festival-friendly film looks like.

“Festivals are another piece of the puzzle of being a filmmaker,” Feder said.

Senior visual and media arts major Pablo Vaca Orvananos won the audience award, which came with $1000 from the Boston Creative Pro User Group, for his film Si no te Vas. The short tells the touching story of an immigrant woman who returns to the Dominican Republic, unsure if she will be able to come back to the U.S.

Vaca Orvananos said he wanted to humanize Latinx immigrants. He said he was inspired to tell the story of these immigrants by conversations he used to have with workers in the dining hall.

“Amongst the things we talked about when I lived in Boston, we would talk about immigration, life in the US, having a life here and another life back home. I think those conversations were a big part of how this story was born,” Vaca Orvananos said.

The other awards were given out during a reception that followed the screening. Graduate visual and media arts student Xuekun Zang won the Barbara Rutberg Documentary Award for Gate of Heavenly Peace, a documentary about the Tiananmen Square protests. Graduate visual and media arts student Yuval Shapira won the Film Nation Award for Narrative Filmmaking for Babies, a somber short about a mother who leaves her baby.

Senior visual and media arts major Jackson Davis said he always knew he wanted to submit his work to this film festival. He had two pieces featured this year.

“This festival is a nice way to come together and support each other,” Davis said.

His first film, The Last Goodbye, is an ode to high school sweethearts. Davis said he shot the film at the Topsfield Fair.

Davis said he created his second film, A Fraction of a Dot, in response to the 2016 presidential election when he saw people lose their faith in humanity. The multimedia piece set Davis’s home movies and an abstract painting to Carl Sagan’s essay “A Pale Blue Dot.” The film depicts what he believes it means to be human, he said.

Bethany Spreadborough, a senior visual and media arts major, began working on her film, This Year’s Angel, early last year. It’s a heartfelt yet comedic stop motion animation about a lonely man on Christmas who falls in love with his angel tree-topper. Spreadborough said finishing it was a personal challenge.

“It was a long slow process,” Spreadborough said.

Anna Feder invited Spreadborough to participate. Spreadborough said she thinks events like this festival give students a chance to support their classmates.

Graduate visual and media arts student Haoyang Wang showed his film, A House by the Waterfall, which is about miscommunication. Wang said he based the film on personal experience of people using their phones when they’re with friends instead of talking.

Wang said he has been to the film festival twice before this year. He said he’s always pleased to see the variety of films. Wang said the diversity in culture and approaches attracts him to this festival. He was also excited to see the work of undergraduate students.

“You don’t really have that many opportunities to communicate between graduate and undergraduate students, and the film festival is a place where this happens,” Wang said.