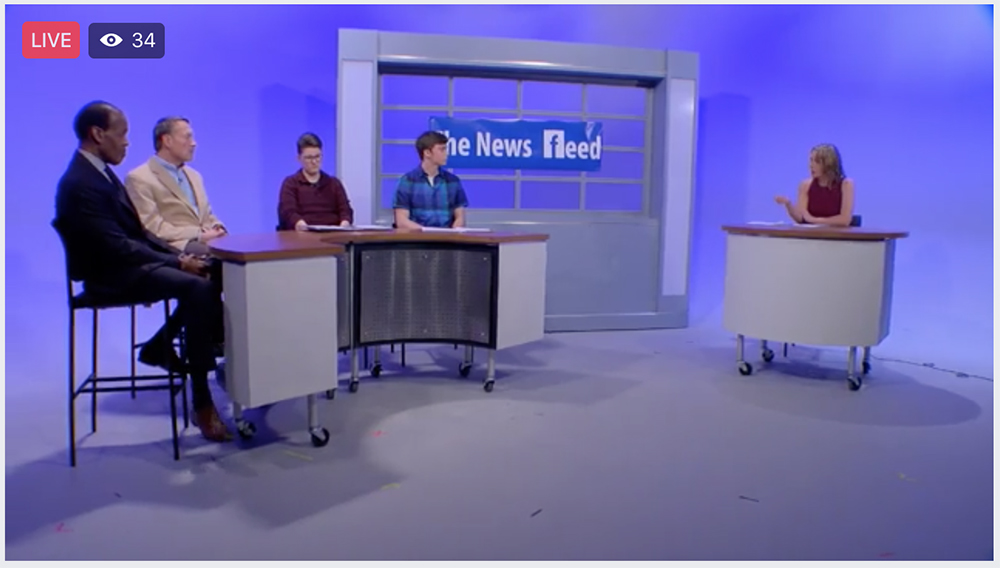 DeFusco, who is set to moderate the debates this semester, explained that once a topic is chosen, a team of associate and logistical producers determine the angle and draft questions for the debate.

She hopes that the show will help the debaters elaborate on certain points from Facebook comments, as well as giving viewers another perspective within a political subject.

“Obviously everyone likes a good Facebook fight,” DeFusco said. “How many times do you see somebody calling somebody else ‘uneducated’ in a Facebook fight? And in contrast, how often do you see that in a face to face conversation? I thought that was a huge problem and that there was a way to combat that.”

Lexie Kaufman, a freshman journalism major at Emerson, is one of the six associate producers for the News Feed. Kaufman said the show has been getting a lot of positive and negative feedback, and she hopes students will open their minds to different opinions.

Picone, a sophomore marketing major and a libertarian, said he chose to participate so that a conservative voice would be represented.

“I thought it would be a good way for me to put my ideas forward and try and carve out a space for myself where I can actually be of use to people on campus who have similar ideas like me, but don’t feel like they can share them,” Picone said.

Picone said he argued against safe space culture and in favor of freedom of speech.

“I think Emerson in particular, it is a bit of a coddled campus,” Picone said “I feel like it could be more inclusive of diversity of thought. In classrooms, I don’t often see conservative or libertarian positions. It’s definitely dominated by the left side.”

Amore, a junior journalism major and a transgender student, said he did not enjoy the discussion and would not join the show again.

“It just felt like I was there to share not just my opinion, but the opinion of a lot of minorities,” Amore said. “It was really interesting because [DeFusco] was asking really general questions, and it was really tough to answer them because obviously I only represent myself.”

Picone said the panelists represented a variety of opinions and that DeFusco was an objective moderator. But he said the 36 minute episode was too short and there was not enough time for counterarguments.

Amore said the show has potential, but is not developed enough yet. He said he left the debate hurt and is worried the show will continually make a minority student argue for their self-validation.

“It’s not because of anyone in particular,” Amore said. “I just don’t think it was made with the consideration for a minority. It sort of just seemed like it was designed for views and a platform for an opinion that I am trying to my very best to respect, but I am having a very tough time doing.”

DeFusco said the team hasn’t decided on the topic for the next episode, which will air April 24. She said she hopes to cover a local issue like charter schools versus public schools or marijuana legalization. Students can nominate friends or submit suggestions to the the News Feed’s Facebook page. DeFusco hopes the show can start meaningful conversations.

“I do think that there’s a blatant lack of contact in today’s political climate,” DeFusco said. “We just want to get people talking and get people really thinking about politics in a way that maybe they haven’t.”

A previous version of this article incorrectly stated The News Feed does not know the date for their next episode. It is April 24.