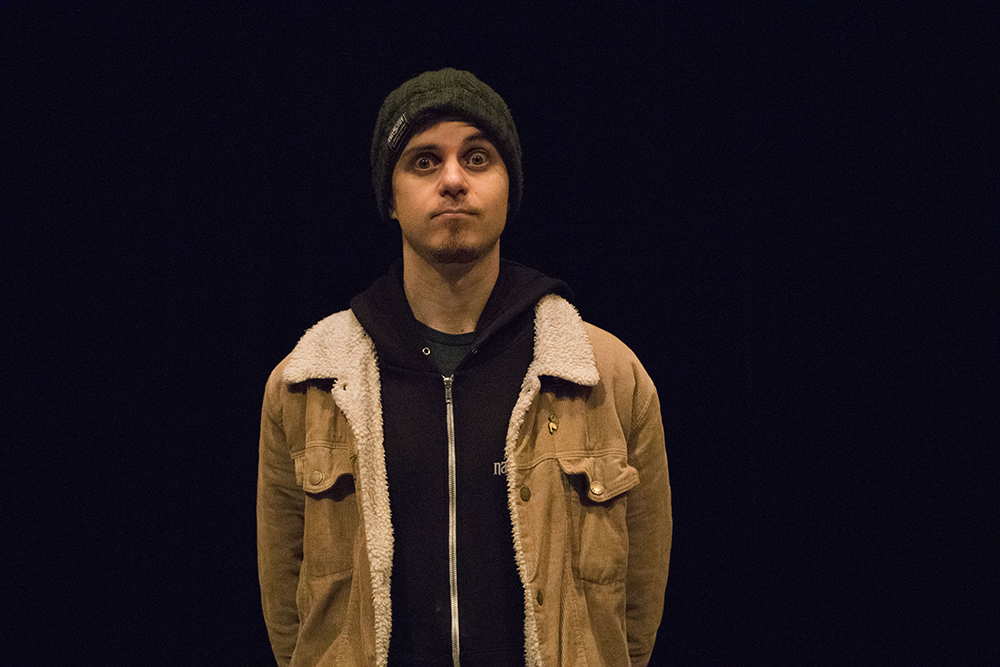 Freshman marketing communication major Cassandra Cloutier waited in line for two hours last Monday for tickets to see the rapper and poet who inspired her to attend Emerson.

At 6:30 p.m., Cloutier finally settled into her seat in the Semel Theatre to listen to alumnus George Watsky, ‘10, read from his 2016 book “How to Ruin Everything: Essays.”

Watsky greeted the crowd of fans with a smile and jokes about the dining hall food.

“I always remember it being kinda good when I was here, maybe that just goes to show you how terrible my taste was,” Watsky said.

The author jumped straight into a reading of Three Stories, an essay from his book about living as a student in Jamaica Plain with his best friends. The tale humorously addressed issues college students know all too well: roommates stealing leftovers, dirty dishes left in the sink, and anti-climatic hookups.

The collection of essays is a departure from Watsky’s usual writing. Since he was 15 years old, Watsky wrote and performed slam poetry, and continued to develop his passion at Emerson. After graduating, Watsky gained recognition for his introspective rap skills with five albums, three EPs, and a track on The Hamilton Mixtape.

While Watsky got his start via online platforms like YouTube, he said he didn’t want his book to be a reflection of that.

“It was important to me that the book wasn’t just put out as a YouTuber memoir. [I wanted to work with a publisher] that looked at me as a part of their writing roster, not just as a social media person that’s selling it to their Twitter followers,” Watsky said. “I’m trying to be a more well-rounded writer, and challenge myself to [write in different styles].”

Although Watsky is well-versed in the technicalities of rhyme and meter, he said his venture into the literary world has shown him new intricacies in language and writing.

“I think [writing a book] gives you an entirely new perspective on the writing process,” Watsky said. “Some of the rhythmic stuff that I do in my spoken word doesn’t transition to the page. I focused on falling out of love with dense lyricality, the similarities that music and spoken word have with each other, and focusing on story and on plot and on metaphor.”

Despite the change in genre, Watsky’s signature vulnerability and insecurity are ever present in How to Ruin Everything. While tapping into these emotions can be a source of anxiety for writers, Watsky sees it as an opportunity to grow.

“I think once you put it on the paper, it’s easier to banish those fears and insecurities,” Watsky said. “Getting them out and having people join you in community is a great way to grow as a person. It can be scary. You’re going to have to put yourself out there and try to trust that the people listening to your work or reading your words are going to support you.”

Director of Student Activities Jason Meier, who oversaw the planning of the event, considers opportunities for Emerson students to interact with alumni exciting and uplifting.

Cloutier met Watsky after he performed at the House of Blues last October. She asked him about his favorite lyrics from his album and she tattooed his answer—“my brain has got a mind of its own”—on her arm in his handwriting. Cloutier said that Watsky’s work encouraged her to attend Emerson.

“I knew that he was an alum of Emerson, and that’s kind of a big reason why I decided to come here,” Cloutier said. “And I was like, ‘If he can go on and have the career that he has after going here, then that’s something I want too.’”