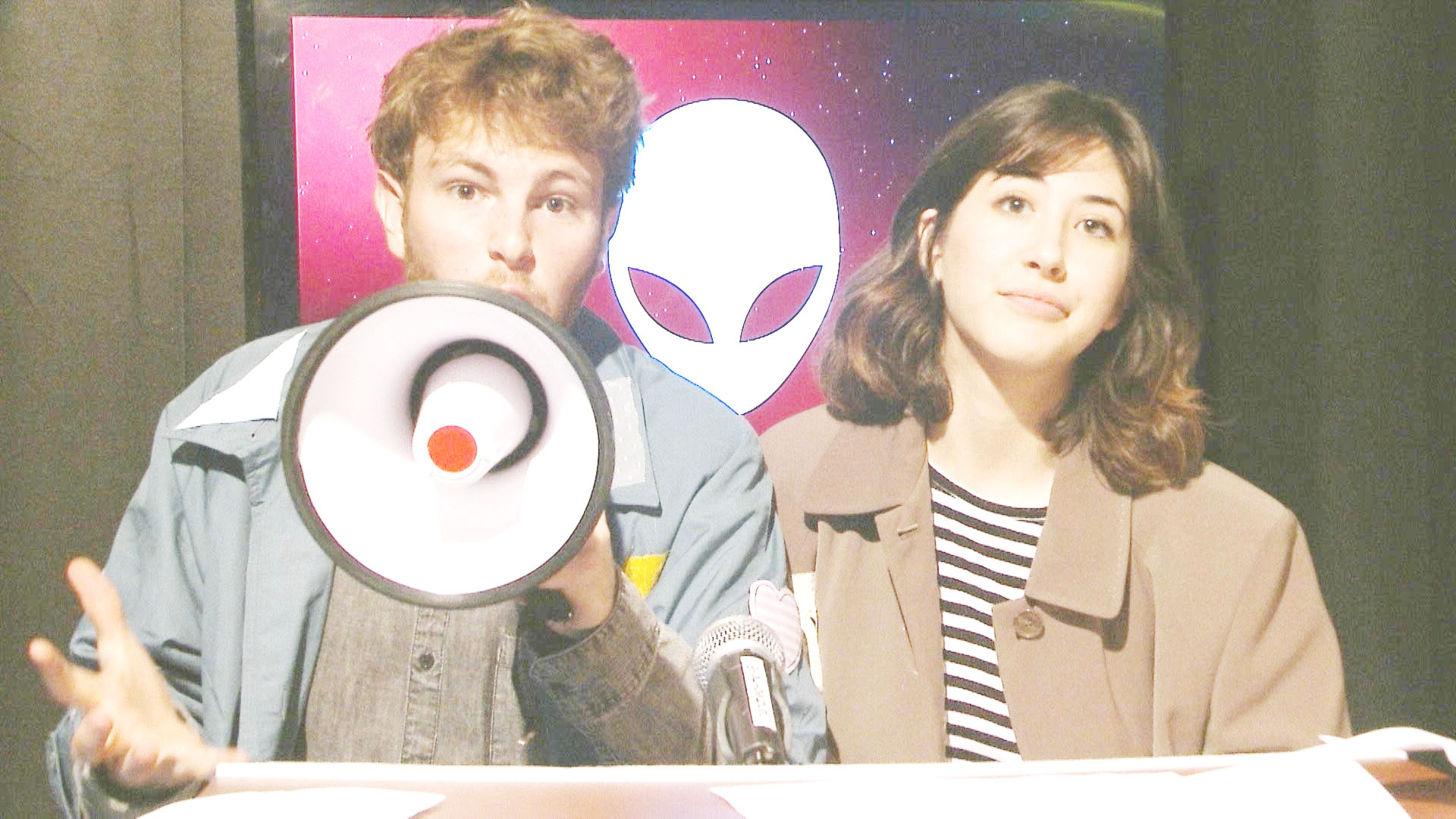 Combine Live with Kelly and Ryan with The X-Files and you get Signs of Life, a parody talk show created by senior Arden Jurskis.

Signs of Life will air on Somerville Community Access Television Fridays or Saturdays at midnight. The sci-fi comedy will play every other week, with a total of six 30-minute installments. The first two are available on YouTube.

“I wanted a show about the people who think aliens are real, with that feel of hot button fake news of today,” Jurskis said.

The show is hosted by Mindy Projet and Gil Berenstein/Berenstain, played by Paula Aceves and Calvin DiLibero. The spelling of Gil's last name changes every episode, referencing the viral theory that two different spellings of The Berenstain Bears created two parallel universes.

“They are lovers and disbarred academics who met on the Club Penguin of the dark web, www.teddybeartreehouse.com,” Jurskis said. “Just very mysterious, weird people who believe that aliens exist, and this is their platform to let the world know.”

Besides playing Berenstein/Berestain, DiLibero is also a writer for Signs of Life. The visual and media arts major said working on a show unaffiliated with Emerson allows the team to explore the strange and supernatural.

In one episode Berenstein/Berenstain and Projet attempted "auditing," a common practice in Scientology. Their tool of choice was a Hello Kitty microwave taped to a lava lamp.

“I think people who are a little manic and crazy are very fun to watch,” DiLibero said. “It’s been cool to activate that part of my brain.”

In each episode, the hosts deliver monologues and examine conspiracy theories in segments like “Celebrity or Alien” and “Headlie News.” Guests range from Dewey Smith, a young boy who saw aliens, to Xenu, a mythical figure in the scripture of Scientology.

“While the show is all scripted, it has an improvisational feel to its construction,” Jurskis said.

The visual and media arts major said the show is written on Emerson’s campus and filmed at SCATV studios.

“It’s very bare bones in terms of a studio compared to what we have at Emerson, but it’s enough where you have flexibility and can experiment,” Jurskis said. “It’s a whole lot of fun.”

Jurskis worked on Heavy Leather Topless Party, a live talk show featuring rock bands, comedians, and burlesque performances, during a summer internship with SCATV. The program inspired Jurskis to create a show of his own.

Erica Jones, SCATV’s director of membership and outreach, said Jurskis inspired former interns to help with Signs of Life. She said Jurskis embraced the community far more than most interns.

“We cultivate a lot of subset cultures here, from the innovative weirdos to the artsy cinematic filmmaker,” Jones said. “Arden shows a great appreciation for what we stand for here, which is ultimately freedom of speech.”

Nine students who Jurskis worked with on other Emerson TV shows comprise the writing staff of Signs of Life.

“Everyone on the staff is so passionate and entrenched, which is in large part why the show is what it is,” Jurskis said. “We come up with a theme, pitch a bunch of ideas for guests, and then build the episode around it.”

DiLibero also interned for SCATV last year, and said Signs of Life made him feel a part of the Somerville community. Without the backing of an organization, he said the writers have to take initiative on their own.

“Arden is just a really great showrunner and director,” DiLibero said. “He knows how to get the best out of people and still keep the atmosphere fun.”

Besides Signs of Life, Jurskis is producing Camp Watchachoosits with Emerson Independent Video. Set in a ‘70s summer camp, the satirical talk show explores morality through the camp’s strange visitors. Jurskis also produced and wrote for Daddy? a live teleplay that won outstanding special production at the EVVYS last year.

“If it weren’t for Emerson’s TV orgs, I wouldn’t have to the confidence to run and go, ‘Hey, I’m making a TV show now!’” Jurskis said. “But it’s cool to be able to make something without feeling like it’s this big Emerson production.”

Jurskis said episode three of Signs of Life will be a Halloween special.

“I don’t know what it’ll be, but I know it’ll be totally strange,” Jurskis said. “I’m looking forward to seeing what’ll happen in the realm of this crazy show.”