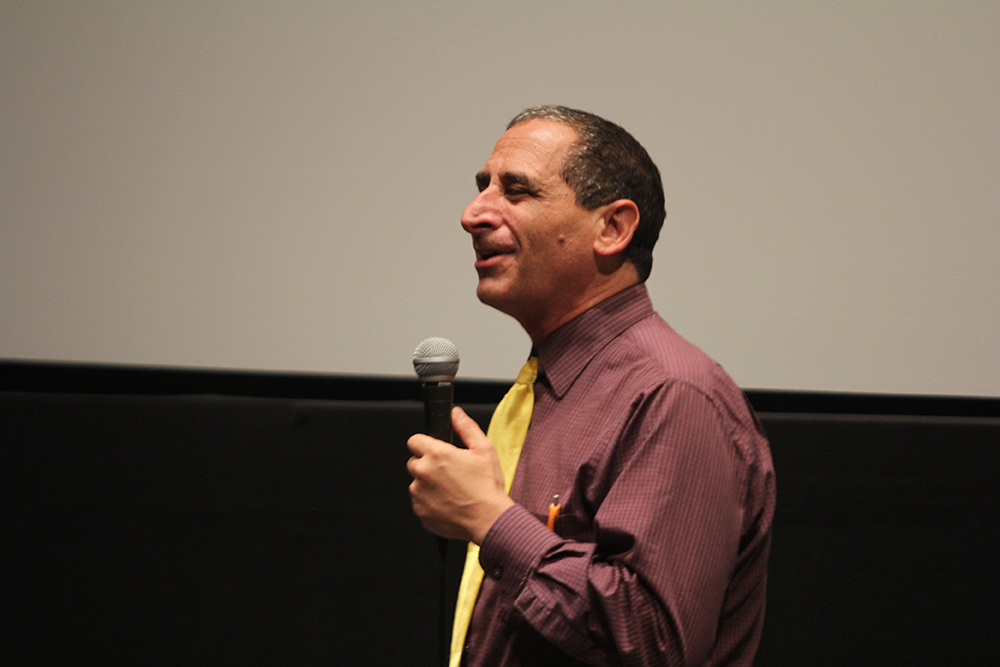 “Patience, care, and persistence” are the three things necessary to becoming a good writer, according to Mike Reiss, the writer, producer, and former showrunner of Fox’s The Simpsons.

Emerson Mane Events, along with Emerson Independent Video and Sweet Tooth Animation,  have been working since before orientation to bring Reiss to Emerson for a public speaking arrangement.

Reiss emphasized three steps to writing better comedy at the masterclass through his “PCP” model. First, you start by putting the idea for a sketch or story aside and not writing it immediately. Unless the story does not leave you alone, do not write it, Reiss said.

Reiss then said the second step is to love every bit of the work. “You’ve gotta sweat every line of the script or the story, you have to care about every bit,” Reiss said.

The third step of writing is going forth and defending it wholeheartedly.

As a writer of 18 children’s books and 24 animated movies such as the Despicable Me and Ice Age franchises, Reiss stressed never giving up on the work. He said he once had a story that was rejected from 37 magazines which eventually ended up being sold for $700,000 as a movie to Adam Sandler. It was a movie that never ended up being made.

A Harvard graduate and former writer for the Harvard Lampoon, Reiss got a job offer from the National Lampoon straight out of college.

“The National Lampoon called and said, ‘we were reading your stuff and we really love it,’” Reiss said. “I asked them, ‘Oh, you guys read the Harvard Lampoon?’ And they said, ‘Oh, we’ve been reading it for years, we just never saw anything good before.’”

Reiss said to get internships whenever possible, no matter how low the position. Whatever the title of the job may be, it’s the experience of each job that matters, according to Reiss.

With 23 writers and only 22 episodes a season, Reiss said, facetiously, he can get by with only contributing one joke a year. At this stage in his Simpsons career, Reiss only works one day a week because it’s all he has to give anymore.

He also said the ending of the show isn’t planned out and there is no grand design. He referred to the writing process as a “giant hole we shuffle jokes into.”

According to Reiss, the only way to get fired from The Simpsons is to fight with other writers and argue about the content going into the episodes.

“There was a time in the middle of the show when people didn’t get along and it manifested itself in the episodes. It was always funny, it just wasn’t pleasant,” Reiss said.

When a student asked him how the writers create new content after 28 years on air, Reiss said they pull from experiences in the writers’ lives. According to Reiss, producer Al Jean often stops the team from repeating the same scenarios with his memory of the past almost-three decades of the show.

Autumn Myers, a junior marketing communications major and membership director for Emerson Mane Events, said the idea to have Reiss speak wasn’t theirs. Natalie Busch, a sophomore visual and media arts major and deputy arts editor for the Berkeley Beacon, suggested him, and they loved the idea, Myers said. The student-run organization reached out to Reiss who was extremely cooperative and great to work with, according to Myers.

“We thought a lot of people would benefit from having [Reiss] come and speak, whether it be comedy majors, video and media arts, or writing for film and television students,” Myers said.

Ryan O’Rourke, a freshman comedic arts major, said Reiss gave great advice about integrity and sticking with ideas that give you passion.

“I thought his discussion of The Simpsons writing process being so collaborative and democratic was encouraging,” O’Rourke said.

During his lecture, Reiss read an excerpt from one of his children’s books, and showed some of his favorite Simpsons work, scenes from his show The Critic, and a segment from his movie Queer Duck.

“If you write for a living, you can’t get writer’s block,” Reiss said. “It should always be fun for you.”

Natalie Busch, who is the deputy arts editor for the Beacon, did not edit this article.