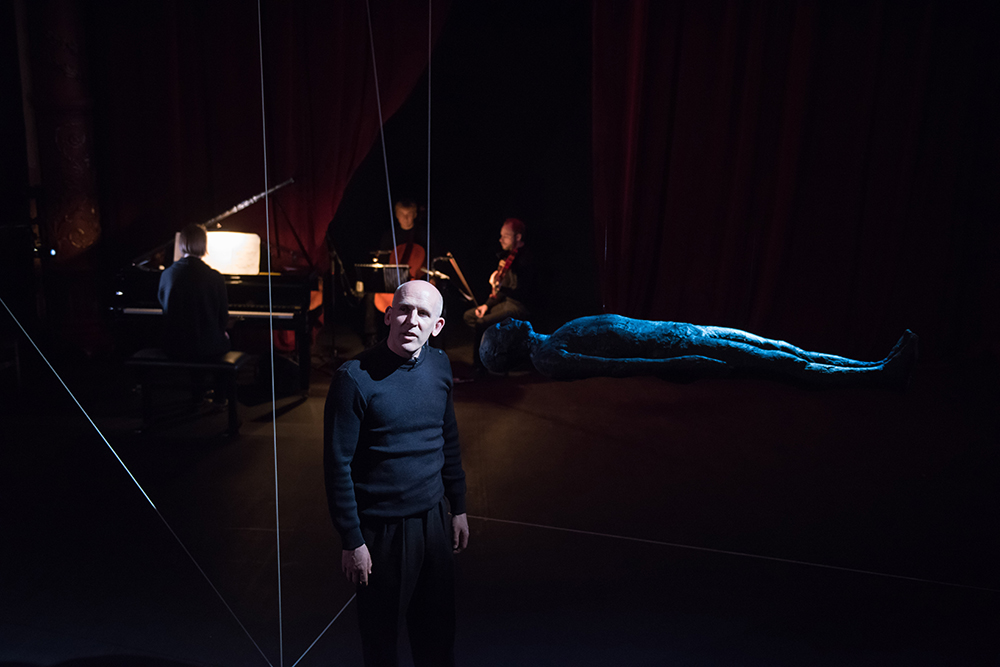 At the newly named Robert J. Orchard Stage (formerly the Paramount Mainstage), audience members were confronted with a striking image: a “rope drawing,” composed of eight thin, white ropes forming an angled rectangular frame, in which a dark effigy floated on its back, corpse-like, in midair. Several feet above it, a single, bare light bulb shone in the half-darkness.

Here All Night, presented at ArtsEmerson by the Irish theatrical company, Gare St Lazare Ireland, is described by co-artistic director and performer Conor Lovett as an evening of music, theater, literature, and the visual arts, based on the work of writer Samuel Beckett. Lovett, along with co-artistic director and spouse Judy Hegarty Lovett (the director of Here All Night), composer Paul Clark, and fiddler Caoimhín Ó Raghallaigh became interested in the importance of music to Beckett, and went through all of his work, looking for references to it.

The result was Here All Night, in which Beckett’s prose excerpts—performed by a solo actor, Lovett—are interspersed throughout a concert, of sorts. This concert is performed with a piano, cello, hardanger d’amore—a type of Norwegian fiddle—a chorus of six female singers, and a solo soprano. Some of the music is Beckett’s own, some was composed by Clark, and the rest is improvised.

“It really is an ensemble piece,” Lovett said. “Nobody is doing more than anyone else, if you like.”

The whole performance was centered around the aforementioned “rope drawing” and effigy—an art installation by distinguished Irish artist Brian O’Doherty called Hello, Sam Redux, 2016, which also acted as a separate, companion piece to Here All Night. Members of the public were able to come before or after the show and go up onto the stage to engage with the installation. This involved four “listening posts”—chairs at which one could sit and, with headphones, listen to people who knew Beckett having imagined phone conversations with him. In addition, a dark hooded figure moved, occasionally, throughout the installation, adding to the atmosphere.

Co-Artistic Director for ArtsEmerson David Dower spoke about bringing Here All Night and Hello, Sam Redux, 2016 to Boston. Gare St Lazare Ireland have been featured in ArtsEmerson before, presenting Beckett’s Waiting for Godot in 2013 and an adaptation of Moby Dick in 2011. This time, their visit coincided with the renaming of the Paramount Mainstage after Robert J. Orchard.

Orchard, the founder and former director of ArtsEmerson, an organization that brings international groups to Boston, was honored at a reception following the performance of Here All Night on Oct. 6.

“I think perhaps my favorite thing about this at all,” Dower said at the reception, “is that it’s happening in the middle of this election season, and we just spent an hour and a half not thinking about it [politics] at all.”

In addition to being an election year in the US, 2016 is also the 100th anniversary of the 1916 Easter Rising, a critical event in Irish history; and Beckett, as an Irish writer, is important to the celebration of Ireland’s cultural legacy. Here All Night reflects Beckett’s important place in that legacy, as well as his unique style.

Lovett, called “perhaps our finest living interpreter of Beckett's work” by the Telegraph, also spoke of this aspect of Beckett’s work.

“For me, there’s such a familiarness about his work,” he said, “and I don’t say that because I’ve spent so much time with it, but even to begin with it was like, ‘Oh yeah, this guy, I get this guy.’ But I’ve also learned over the years, from doing so much of his work, that it sort of reflects back to the individual, almost, what’s going on in your own life, or the stuff you already know. Somehow, your own thing is affirmed. And sometimes questioned, and sometimes played with.”

James La Bella, a freshman performing arts major, seemed to have had this experience seeing Here All Night.

“It was especially interesting going in without ever having seen a Beckett show on stage before,” he said. “I’ve read a bunch of his plays, but I’ve never seen a live performance of his work.”

He also said that though he hasn’t read any of Beckett’s prose, he would be very interested to now.

It was Beckett’s prose that excited Lovett most when he began reading Beckett as a teenager, around the same time he began acting.

“It was like that way when you read a novel, or hear a piece of music, and you love it, and you can’t wait to tell your friends about it,” he said. “I was saying to people, ‘Have you read Beckett? He’s brilliant!’”

“And I guess it’s always been like that,” Lovett continued. “It’s not that we’re crusading to expose people to Beckett or any of that, but there’s still an element of that impetus of, ‘Hey, this is great. Wait till you hear this!’”